Six reasons not to intervene in Libya 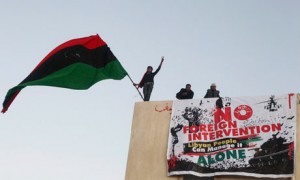 2. Gaddafi does want us to: it would justify his shtick about defending Libya against foreign invaders.

3. If Libya, why not Zimbabwe? Or China? Lefties point out – and they are surely on to something – that a selective intervention against Gaddafi would be contrasted across the Arab world with the West’s support for the Iraqi and Bahraini regimes in shooting demonstrators. Why pursue a policy which would cost blood and treasure and make us unpopular?

4. We can’t afford it. Europe lost its global military capacity long ago, Britain is in the middle of cutting back the Royal Navy and scrapping large chunks of the RAF. The Americans still have the capability, but have thrown away a trillion dollars on the bailouts and another trillion on the Iraq invasion. As the man said, a trillion here, a trillion there, and pretty soon you’re talking real money.

5. There is no obvious British interest here. Libya is not a former colony or protectorate, and has no special links with the United Kingdom. Why make their problems our problems?

6. The strongest basis for friendship with the Arab nations is to allow the emergence of genuinely representative regimes – regimes which visibly succeeded on their own, as this Libyan blogger persuasively argues.

Incidentally, allowing Libyans to succeed on their own means allowing them to try their former leaders according to their own norms. We should drop the idea of hauling Gaddafi before the ICC – a court which symbolises almost everything that is wrong with the current global order (see here).

*Daniel Hannan is a writer and journalist, and has been Conservative MEP for South East England since 1999. He speaks French and Spanish and loves Europe, but believes that the European Union is making its constituent nations poorer, less democratic and less free.