Libya: A state of terror 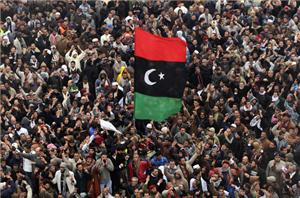 On February 22, Muammar Gaddafi, the Libyan president, appears on Libyan state television – sharing his troubles with the world and declaring war on his people.

It began in Benghazi, with the police shooting two men at a rally demanding the release of a human rights lawyer.

Internet calls for a ‘day of rage’ take on the language of the recent Egyptian revolution, and as the men are buried, police open fire on the mourners. Furious crowds confront security forces and outrage spreads across Libya, demanding an end to Gaddafi’s rule.

The state crackdown is gruesome, hundreds of Libyan’s are killed, but the chant “the people want regime change” only gets louder, the will to remove Gaddafi stronger.

For the watching world, Gaddafi’s cruel retaliation defies belief, but for Libyans, the danger inherent in speaking out is nothing new. It has become an inescapable part of their life.

For many Libyans, the uprising against Muammar Gaddafi is a watershed moment in a lifetime of fear, and for the generation of Libyan exiles the uprising revives memories of what they left behind.

Some have waited all their adult lives for the tide to change, and now dare to break their silence and anonymity for the first time.

Their stories of brutal measures to crush opponents echo the horrific accounts from Libya’s civilian population today, as they endure Gaddafi’s reprisals.