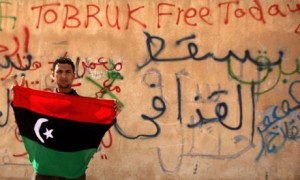 Libya’s rebel leaders have ruled out any attempt by Hugo Chávez to broker a truce between them and Muammar Gaddafi, whom they insist must leave the country.

“No one has told us a thing about it and we are not interested anyway,” said the spokesman of the national committee in Benghazi, Abdul Hafif Goga. “We will never negotiate with him.”

The rebel leadership said the international community had yet to inform them of any initiative from the Venezuelan president, who reportedly contacted the embattled Libyan leader earlier this week in a bid to enter the fortnight-long violent standoff.

“Talk of peace is far too late,” said a second member of the organising committee, Salwa Bogheiga. “A lot of people have died and there is no one to negotiate with. They lost that right when they started killing people on 17 February.”

The nascent rebel committee in Benghazi and the military leadership that jointly run the eastern side of the country insist that they are now too committed to consider any sort of ceasefire. They say that Gaddafi would use it to re-organise his loyalist troops for a major assault on rebel-held cities.

Details of what Chávez proposed to Gaddafi are scant. The Arab League has also been told of the Venezuelan leader’s offer but is similarly in the dark about what it entails.

In Tripoli, the Libyan government said it accepted the Venezuelan offer.

The information minister, Andres Izarra, said the Arab League had shown interest in Chavez’s proposal to send an international commission to talk with both sides in Libya.

Reports that Chavez’s proposal was being taken seriously by Arab leaders has pushed down oil prices.

In Benghazi, Khalid Alsahly, a lawyer who is acting as liaison officer between the military and civilian councils, said: “The starting point of our revolution is peaceful resistance, and we were peaceful until Gaddafi’s people started using guns and fire on us.

“Now we are training and, yes, we will march to Tripoli if necessary. We have a very great number of young men who are being trained, and we have the resolve.

“They are full of desire to change the Gaddafi regime and we will march on Tripoli because we have the will to fight, and his people do not. We will move when we are ready.”