Analysts: How serious is the Chavez Libya peace plan?

by yalibnan
1191
Analysts see little chance that any Chavez-backed plan would succeed in negotiateing a peaceful settlement to Libya's intensifying conflict.
Share: 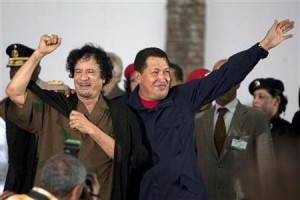 The Arab League head Amr Moussa said on the Thursday the group would consider a proposal by Venezuelan President Hugo Chavez to negotiate a peaceful settlement to Libya’s intensifying conflict.

Energy analysts consulted by Reuters said they saw little chance that any Chavez-backed plan would succeed.

“Gaddafi is an ideological friend and ally who has stood with Chavez in difficult times and now Chavez is reciprocating. It is unclear whether the Arab League or the U.N. will agree given his clear bias in favor of Gaddafi. If Chavez can spin this that he is a powerful figure astride the world stage who can solve international problems while propping up an ally who he is really worried will be overthrown, it will help Chavez with anti-American countries who like to see America lose. It won’t help him domestically.”

“I don’t think that another relatively extreme leader who is an ally to Gaddafi has a chance to be accepted as a peace-broker. It’s very unlikely to work.”

“It has become likely that Libyan fighting will affect, and potentially destroy, oil infrastructure serving the country’s largest, central basin, which is right on the fault line between Gaddafi loyalists and rebels.”

“The violence and bomb strikes could hit export terminals, and might extend to upstream infrastructure and pipelines. I think that the risk of Libyan oil exports remaining affected for a long period are already being priced into oil.”

“Whatever comes of it, the plan looks very vague and I don’t think it will be seriously considered. An earlier press report indicated the Arab League ‘accepted’ the plan, but we now see that isn’t the case.”

“The possibility of very lengthy conflict in Libya has increased. What is most worrisome today is how close to the country’s oil installations the violence has come. Exports from Libya could be wiped out.”

“There is probably no chance that rebels would be willing to sit down at a negotiating table with Gaddafi now. It’s highly unlikely a Chavez peace proposal could work.”

“Government forces are attacking the oil city of Brega, and this city is at the center of the conflict. According to state oil company NOC, Libya’s oil infrastructure hasn’t been damaged yet. But the risk of damage is increasing, and that could make it harder for Libya to resume oil supplies any time soon.”

TIM RIDDELL, head of technical analysis at ANZ in Singapore:

“If it’s coming out of Chavez, it might not have a great degree of substance. I don’t think it has a lot of credence, but it just looks like it’s causing some unwinding of the most recent speculative positions. The market was long oil and long gold.”