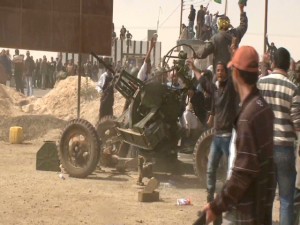 Two towns in eastern Libya were bombed for a second day Thursday, witnesses said, hours after the government denounced reports of attacks on protesters and military facilities.

Two bombs were dropped on military camps in Ajdabiya, a tribal leader said.

Another bomb fell in al-Brega between the oil facility and the airport Thursday, but there were no injuries or damage, witnesses said.

The attacks come a day after ground and air attacks on al-Brega, which has key oil and natural gas facilities.

On Wednesday, aircraft dropped bombs near the town and troops loyal to Moammar Gadhafi launched a ground attack, witnesses said. Aircraft also bombed military camps on the outskirts of Ajdabiya on the same day, witnesses said.

While CNN has staff in some cities, the network cannot independently confirm reports for many areas in Libya. CNN has gathered information through telephone interviews with witnesses.

Protesters calling for the ouster of longtime leader Gadhafi have taken to the streets for a third week amid clashes with government forces. He has been in power for nearly 42 years.

“We need tribal intervention, social intervention to help us convince these people to come to the negotiating table,” Musa Ibrahim, the government spokesman, told CNN’s “AC360.”

“This is an armed rebellion, with people going around attacking police stations, army offices, getting a hold of guns and attacking.”

The government spokesman said that assertions of military attacks on demonstrators are wrong. The government had supported peaceful protests, he said, but reiterated accusations that al Qaeda supporters have hijacked the movement and are triggering chaos.

“We have captured dozens of these people, we have figures, we have interviews, we are willing and prepared to take these people and show them on international media,” the spokesman said.

More than 1,000 people are reported to have been killed and many more injured during the protests, according to the United Nations. Libya’s ambassador to the United States has estimated that the death toll was about 2,000.

The International Criminal Court will announce Thursday an overview of the alleged war crimes since the protests started last month.

“Following a preliminary examination of available information, the prosecutor has reached the conclusion that an investigation is warranted,” the ICC said in a statement.

Ibrahim slammed plans to investigate the alleged war crimes and said the decision was based on reports without any fact-finding mission into the country.

“The international community’s reaction toward what is happening in Libya has not been very honest and transparent,”

“The Security Council, for example, based its agreement against Libya on reports without any fact-finding mission, without visiting Libya, without allowing Libya to defend itself.”

Libya is not a signatory to the Rome Statute, which created the ICC, and does not recognize the authority of the international court. But the United Nations Security Council referred the matter to the court, essentially giving it “jurisdiction” over the situation in Libya.

The clashes in Libya have gone on for days, with the bombings in al-Brega on Wednesday happening as Gadhafi addressed his supporters.

News of the bombings could support calls for the imposition of a no-fly zone over Libya to prevent such attacks. The United States has said all options are on the table and is weighing a possible military role, but Arab League officials have also rejected foreign military intervention in Libya.

“We perceive what happened and what is happening is an internal affair that is decided by the people and their governments,” the Arab League said in a statement.

The demonstrations — which follow protests in neighboring Egypt and Tunisia that ousted those countries’ leaders — have sparked criticism from world leaders.

Nations have scrambled to evacuate scores of citizens as the unrest continues.

The Netherlands defense ministry said Thursday that three Dutch navy personnel were captured by armed men loyal to Gadhafi during an evacuation operation Sunday. The ministry did not release information earlier because of safety reasons.

The capital city of Tripoli remains under Gadhafi’s control, though opposition forces have taken control of the eastern city of Benghazi and a number of other cities.

The U.N. refugee agency reported that nearly 150,000 people had crossed Libya’s borders into Egypt and Tunisia, and thousands more were arriving hourly at the borders.