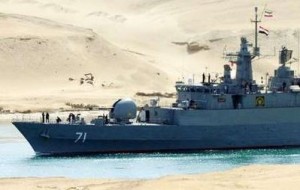 Two Iranian navy ships have entered Egypt’s Suez Canal and are expected to reach the Red Sea later in the day, a source in the canal authority said on Thursday.

“The two Iranian ships entered the Suez Canal at 0400 a.m. (0200 GMT) from the northern entrance of the Mediterranean and are on their way to the Red Sea,” the source said