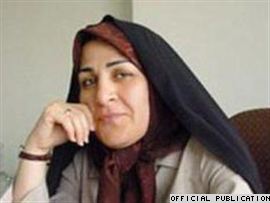 The wife of jailed reformist politician Mostafa Tajzadeh was among those taken into custody during antigovernment demonstrations in Tehran on March 1, RFE/RL’s Radio Farda reports.

Tajzadeh, a former deputy interior minister, is a senior member of the Islamic Iran Participation Front and the Islamic Revolution Mujahedin Organization. He was arrested shortly after the disputed presidential election in June 2009.

His wife, Fakhrosadat Mohtashamipur, is also a member of the Islamic Iran Participation Front and has written several letters to Iranian authorities criticizing her husband’s incarceration.

On March 1, security forces clashed with protesters in Tehran who rallied to demand the release of two opposition leaders. Witnesses said dozens of protesters were arrested.

Mohtashamipur’s son-in-law, Ali Tabatabai, told Radio Farda that when Mohtashamipur was being arrested she called her daughter on her mobile phone and left it on so that she could hear what was happening to her mother.

Tabatabai added that Mohtashamipur was heard via the phone protesting her detention by security forces, saying “I’m only walking with people on the street, why are you arresting me?”

Mohtashamipur had previously been detained twice, the last time when she went to the funeral service for leading dissident cleric Grand Ayatollah Hossein Ali Montazeri in December 2009. She was released after two days.

Tabatabai added that Mohtashamipur was recently threatened with arrest following her decision to stage a sit-in in front of Tehran’s Evin prison after being denied a visit with her husband for six months.

Tajzadeh was released on bail in the run-up to the Iranian New Year in March 2010, but recalled again to Evin prison after filing a complaint with six other reformists against commanders of the Islamic Revolutionary Guard Corps for their “interference in the June 2009 presidential elections.”