Clinton called on Gaddafi to step down 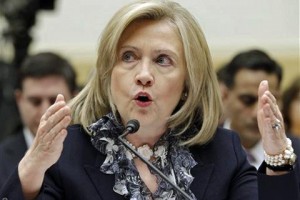 U.S. Secretary of State Hillary Clinton says the crisis in Libya will be a crucial test for U.S. foreign policy, and warns that Libya could become a peaceful democracy or face protracted civil war.

The top U.S. diplomat Tuesday repeated calls for Libyan leader Moammar Gadhafi to step down. She told lawmakers in Washington that “the stakes are high.”

She said the right combination of U.S. diplomatic, development and defense efforts will be crucial. She said the United States is sending humanitarian experts to the region, along with military teams for support.

She also said Washington will continue considering all options on Libya as long as the government there continues to, in her words, “turn its guns on its own people.”

Clinton’s testimony to the House Foreign Affairs Committee comes as lawmakers are looking to slash government spending and reduce debt.

The committee chair, Republican Ileana Ros-Lehtinen from the southern state of Florida, criticized the Obama administration’s request for a sizeable increase in the State Department’s 2012 budget.

Clinton defended U.S. foreign aid, saying such spending helped train a generation of military officers in Egypt who refused to fire on their own people during the recent protests in Cairo.

U.S. lawmakers were also concerned about the impact of developments in the Middle East on the Israeli-Palestinian peace process.

Clinton said the U.S. believes that despite government changes in Egypt – a key player in Middle East peace talks – there is an opportunity to advance the process. She also said a two-state solution is still in Israel’s best interest.

She also warned cutting the diplomatic budgets for efforts in Iraq, Afghanistan and Pakistan would undermine U.S. efforts to stabilize those regions.

Clinton said shifting responsibilities from military to civilian efforts saves money. She said the U.S. military’s total worldwide request dropped by $45 billion from 2010, while the State Department’s cost will increase by less than $4 billion.

Last month, the U.S. House of Representatives approved a 16 percent cut in funding for this year’s State Department and U.S. Agency for International Development budgets. Clinton said if those cuts went through it would be “devastating” to national security.

On Tuesday, the ranking Democrat on the House Foreign Affairs Committee, Democrat Howard Berman from the western state of California warned that the United States risked losing its place in world affairs if it cut the diplomatic budget too much.

He said the more the U.S. cuts foreign assistance, in his words, “the more we cede the playing field to China.”

During her testimony, Secretary Clinton said Washington would like to open more foreign aid offices in Pacific countries, where the U.S. is competing with China for vast energy resources. VOA