The number of people fleeing violence and chaos in Libya has topped 140,000, with about half of them entering Tunisia. 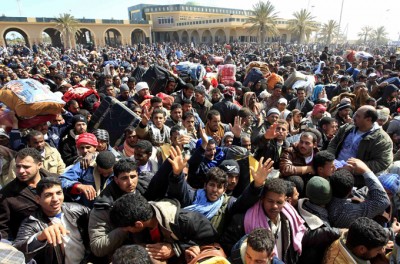 Aid workers warned on Tuesday that the situation at the border with Tunisia has reached a crisis point, as border guards were firing into the air, trying to control crowds pressing to get through the Ras Jdir crossing.

Immigration officers were struggling to keep up with the mass exodus as people were pressed up against a concrete wall dividing the no man’s land between the Libyan and Tunisian border posts. At intervals, Tunisian border guards would open a blue metal gate to let a small group through.

But some threw their bags over the wall and tried to climb over, prompting border guards first to hit them with sticks and then to fire repeatedly into the air.

Al Jazeera’s James Bays, reporting from the Tunisian side of the border, described the situation as “really chaotic”

“Things are now at breaking point,” he said. The crowds on the Libyan side have been growing and the situation for them has been getting much worse. We’ve seen people being taken from the crowd, people who collapsed, fainted, suffering from dehydration and stress.”

Volunteers were throwing bottles of water over the wall into the crowd and others were handing out food to people seeking shelter at the Tunisian side.

“It looks like it’s going to get worse … They are going to break down the wall in the end,” Ayman Gharaibeh, an

officer with the UNHCR, the United Nations refugee agency, said.

Authorities say up to 75,000 people have crossed into Tunisia in just the past nine days, many of them foreign labourers.

Thousands of Vietnamese and Bangladeshis at the Libyan side of border with Tunisia are “in urgent need of food, water and shelter,” Jemini Pandya, a spokeswoman for International Organisation for Migration, said. Nepalese, Ghanaians and Nigerians were also sleeping unprotected at the borders, she said.

The UNHCR extended its camp near the border overnight, erecting tents with a capacity to accommodate 10,000 people. The organisation was preparing to put in more tents to increase the camp’s capacity to 20,000.

“Water and sanitation is a major issue, toilets are our next big headache,” Hovig Etyemezian, a UNHCR official, said.

Egyptian authorities said 69,000 people have fled into Egypt from Libya in the past 10 days, most of them Egyptians who have already been taken to other towns and cities.