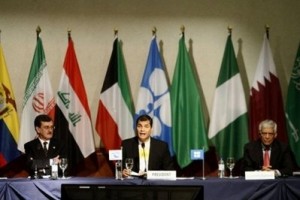 OPEC members and oil producers outside the group can compensate for any halt in crude shipments from Libya, Qatari Oil Minister Mohammed Saleh Al Sada said, after prices surged last week to a two-year high.

“We think there is no shortage of supply,” Al Sada told reporters in Doha today. “OPEC and others outside OPEC can make up for the loss of Libyan production.”

Concern that political upheaval in North Africa and the Middle East would disrupt supplies drove the price of crude to $103.41 a barrel last week, the highest level since September 2008. Libya holds the largest proven oil reserves in Africa.

Al Sada’s comments followed those of a Saudi Arabian oil official, who said on Feb. 24 there was no reason for oil prices to rise because Saudi Arabia and the Organization of Petroleum Exporting Countries wouldn’t allow shortages to exist. Qatar and Libya are among the 12 members of OPEC, which pumps about 40 percent of the world’s oil. Saudi Arabia is the group’s largest and most influential member.

The Saudi official, who declined to be identified by name, said in a telephone interview that some African oil going to Asian markets can be redirected to Europe, while extra Saudi oil can go to Asia to replace Nigerian or Angolan supplies there.

Violent clashes between opponents of Libyan leader Muammar Qaddafi and forces loyal to him have reduced the North African nation’s oil output by at least 850,000 barrels a day from 1.6 million before the conflict, according to a statement on the website of the International Energy Agency on Feb. 25. The Paris-based IEA advises industrialized, oil-consuming nations.

“Almost all international oil companies operating in Libya have reported partial or full shut-in of output,” the IEA statement said. These companies account for about 72 percent of the North African country’s output. The status of oil fields operated by the National Oil Corp., which accounts for the remaining 28 percent of production, was “still unclear,” the agency said.