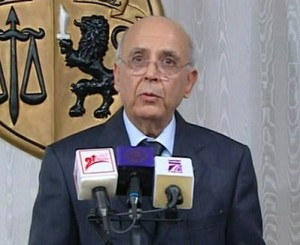 “I have decided to quit as prime minister,” Ghannouchi told a news conference on Sunday, saying that he thought carefully before taking the decision which was supported by his family.

“I am not running away from responsibility. This is to open the way for a new prime minister,” he said.

“I am not ready to be the person who takes decisions that would end up causing casualties,” Ghannouchi said, as security forces clashed with anti-government protesters who were heading to the interior ministry.

Ghannouchi has been leading the country since president Zine El Abidine Ben Ali left the country on January 14 following a popular uprising.

Ghannouchi was a longtime ally of Ben Ali, and had pledged to guide the country until elections can be held this summer.

Demonstrations have again erupted in the North African country in recent days, and three people were killed in clashes between demonstrators and security forces in Tunis, the capital, on Saturday.

“Three people died from the dozen who were wounded during clashes and were transferred to hospital for treatment,” the interior ministry said in a statement..

“Several members of the security forces were wounded to different degrees.”

Security forces had fired warning shots and tear gas at the anti-government demonstration, and protesters responded by hurling stones, journalists from the AFP news agency said.

An interior ministry official, who declined to be named, told the Reuters news agency that the deaths had occurred after a riot orchestrated by loyalists of Zine El Abidine Ben Ali, the ousted president.

“Those who were arrested have admitted they were pushed by former Ben Ali officials,” he said. “Others said they were paid to do it.”

On Friday, tens of thousands of protesters had taken to the streets demanding the resignation of Ghannouchi.

The interior ministry statement said more than 100 people were arrested on Saturday and 88 people had been arrested on Friday.

It blamed the clashes on “agitators” who it said had infiltrated the peaceful demonstrations.

They had used students “as human shields to carry out violent acts, fires aimed at sowing terror among the people and targeting the internal security forces,” the statement said.

Ghannouchi announced on Friday that the government will hold elections by mid-July.