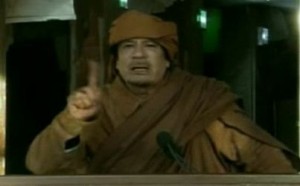 Libyan leader Moammar Gadhafi said today that he won’t step down and that he wants to die as a martyr in his country.

Key highlights will be included in this article as they are released.

Fighting will carry on street by street until Libyan soil is liberated.

The martyrs will take the streets and form new committees.

You cowards, you hold one rifle and think you are brave. These young people should know, they’ve been duked. They got them drugged and drunk, so that they don’t know what to do. 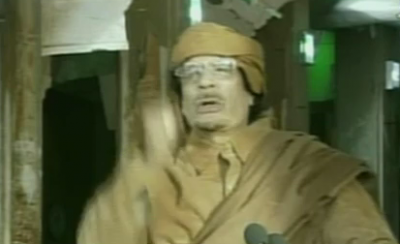 You are the spark, come out of your homes, attack them in their dens – they are drugging your children and sending them to hell. Your children will die.

Chase them everyone – come on, wake up, come out of your homes. Who will provide you with electricity and water? If these cockroaches carry on, they might deny you of oil.

We built benghazi and they’re destroying it again.

Do you want Libya to become Afghanistan and Iraq? If not, take the streets, disarm them, arrest them, hand them over to the security forces. This is a small army of terrorists working to bring in Al Zawahiri and Bin Laden, so that the Americans can come and take over. 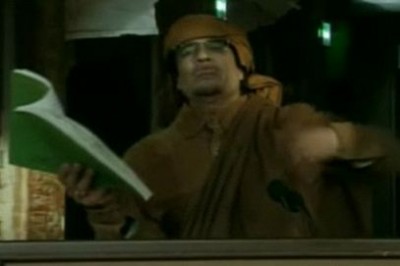 Reading from a book, Gaddafi recited the consequences of the protesters: Ransacking, looting, destruction – the punishment is execution.

Any act of instigating a civil war, or destabilizing the national unity will be punished by execution.

Not the rats, those who take pills, but all the youth need to establish committees of popular defense. They have to hold signs on their shoulders that say they are from popular security. They have to take over, and the officers and police have to regain their positions.

The bad youth – their parents are supposed to present them to the authorities. All the women who have children, the men, they have to come out to the streets. We have to start a popular revolution to take over the country – we’ll show them what a popular revolution looks like. We will show them how these popular committees are. The committees of defending the revolution, the dignity, Moammar Gaddafi, the slogans of defense. 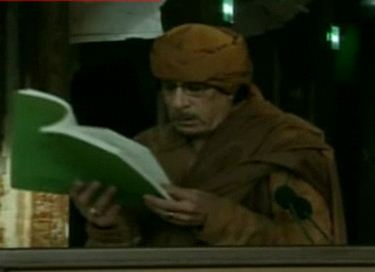 Those gangs are attacking houses, kidnapping people from houses. They accuse us of using airplanes and tanks – we are at a warfront trying to arrest them.

The Libyan petrol belongs to all the Libyans, take it into your hands and do what you want with your share. You are free.

I think Seif Al-Islam will be appealing with the ambassadors and media who will publish all the facts, and not those dirty media stations who broadcast lies. Just fake images. The Libyan [state media] station is the true authority.

On the demonstrators: They are just a bunch of criminals, you should not be afraid of them.

Boris Yeltsin – faced a parliament strike, after a few days of standoff, Yeltsin started to bombard the parliament. He accused them of treason.

Students in Beijing [Tienanmen Square] were crushed by tanks in the square, the others fled.

The Russian power is much more than a bunch of MP’s in the parliament. 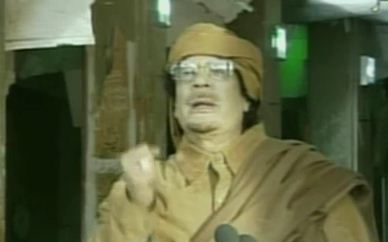 Internal demands can be dealt with if they have to be, peacefully. But to conspire with foreigners is something different. We know each other, but how the youth are demonstrating is shameful – to call them ancestors is a shame – the young people have been cheated by others. Be ashamed of yourselves.

The youth are children of great martyrs – they were not bribed by foreigners.

When we find out each others names, we know the families of each other, we know each other. How can we forget about our history? It’s unbelievable. 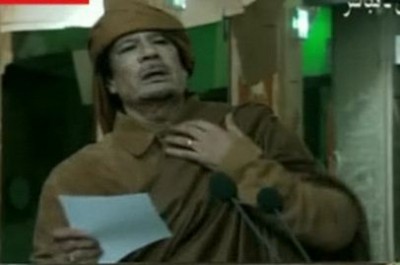 Just look how the Arabs have said that I issued orders to open fire on the people. I didn’t say that.

You are demanded to hand over the arms in order not to frighten the innocent people. The people are afraid.

All the rioters are to be arrested, and to be handed over to security. In order to stop them from taking hallucination pills, because that is damaging their health.

Do we have to burn down our country?

Finally, all the things I have said must be fullfilled – handing over arms, handing over rioters. Libya is exposed to anti-freedom and anti-democracy forces, we must rebel and start our march. 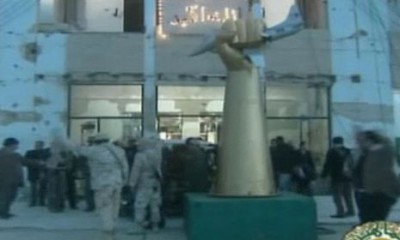 Those youth have to surrender, and we will treat them from the pills they are taking. Bring your sons, your cousins, we will try to rectify them. They are not our youth, they are being controlled from abroad by foreigners. If all that is not achieved, we will declare the holy march, I am the leader Gaddafi, millions are supporting me, I call upon millions from Sahara to Sahara in order to march to purify Libya from all the dirties. I am supported by millions and God, which is a great power. I have millions with me, not just inside the country but from abroad. Quickly respond before I issue my order. Arrest those who are tampering with our security. The nations march will start led by Gaddafi – I stayed here. Am I in Venezuela? Would I run away to Venezuela? That is unbelievable. I swear by God, believe me – this is where I am – those Arab stations are the fierce enemy – they want to destroy the freedom, the popular power, the country.

My brothers in Qatar – is this joint brotherhood we have? Instead of supporting us, you become our enemies? You will regret it. At the day of realizing it, it will be too late.