Gaddafi: A comedy turned to serious tragedy in final days

by yalibnan
1853
By Robert Fisk Cruel. Vainglorious. Steeped in blood. And now, surely, after more than four decades of terror and oppression, on his way out?
Share: 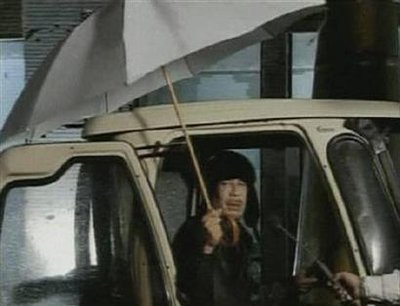 So even the old, paranoid, crazed fox of Libya – the pallid, infantile, droop-cheeked dictator from Sirte, owner of his own female praetorian guard, author of the preposterous Green Book, who once announced he would ride to a Non-Aligned Movement summit in Belgrade on his white charger – is going to ground. Or gone. Last night, the man I first saw more than three decades ago, solemnly saluting a phalanx of black-uniformed frogmen as they flappered their way across the sulphur-hot tarmac of Green Square on a torrid night in Tripoli during a seven-hour military parade, appeared to be on the run at last, pursued – like the dictators of Tunis and Cairo – by his own furious people.

The YouTube and Facebook pictures told the story with a grainy, fuzzed reality, fantasy turned to fire and burning police stations in Benghazi and Tripoli, to corpses and angry, armed men, of a woman with a pistol leaning from a car door, of a crowd of students – were they readers of his literature? – breaking down a concrete replica of his ghastly book. Gunfire and flames and cellphone screams; quite an epitaph for a regime we all, from time to time, supported.

And here, just to lock our minds on to the brain of truly eccentric desire, is a true story. Only a few days ago, as Colonel Muammar Gaddafi faced the wrath of his own people, he met with an old Arab acquaintance and spent 20 minutes out of four hours asking him if he knew of a good surgeon to lift his face. This is – need I say it about this man? – a true story. The old boy looked bad, sagging face, bloated, simply “magnoon” (mad), a comedy actor who had turned to serious tragedy in his last days, desperate for the last make-up lady, the final knock on the theatre door.

In the event, Saif al-Islam al-Gaddafi, faithful understudy for his father, had to stand in for him on stage as Benghazi and Tripoli burned, threatening “chaos and civil war” if Libyans did not come to heel. “Forget oil, forget gas,” this wealthy nincompoop announced. “There will be civil war.”

Above the beloved son’s head on state television, a green Mediterranean appeared to ooze from his brain. Quite an obituary, when you come to think of it, of nearly 42 years of Gaddafi rule.

Not exactly King Lear, who would “do such things – what they are, yet I know not, but they shall be the terrors of the earth”; more like another dictator in a different bunker, summoning up non-existent armies to save him in his capital, ultimately blaming his own people for his calamity. But forget Hitler. Gaddafi was in a class of his own, Mickey Mouse and Prophet, Batman and Clark Gable and Anthony Quinn playing Omar Mukhtar in Lion of the Desert, Nero and Mussolini (the 1920s version) and, inevitably – the greatest actor of them all – Muammar Gaddafi. He wrote a book – appropriately titled in his present unfortunate circumstances – called Escape to Hell and Other Stories and demanded a one state solution to the Israeli-Palestinian conflict which would be called “Israeltine”.

Shortly thereafter, he threw half the Palestinian residents of Libya out of his country and told them to walk home to their lost land. He stormed out of the Arab League because he deemed it irrelevant – a brief moment of sanity there, one has to admit – and arrived in Cairo for a summit, deliberately confusing a lavatory door with that of the conference chamber until led aside by the Caliph Mubarak who had a thin, suffering smile on his face.

And if what we are witnessing is a true revolution in Libya, then we shall soon be able – unless the Western embassy flunkies get there first for a spot of serious, desperate looting – to rifle through the Tripoli files and read the Libyan version of Lockerbie and the 1989 UTA Flight 722 plane bombing; and of the Berlin disco bombings, for which a host of Arab civilians and Gaddafi’s own adopted daughter were killed in America’s 1986 revenge raids; and of his IRA arms supplies and of his assassination of opponents at home and abroad, and of the murder of a British policewoman, and of his invasion of Chad and the deals with British oil magnates; and (woe betide us all at this point) of the truth behind the grotesque deportation of the soon-to-expire al-Megrahi, the supposed Lockerbie bomber too ill to die, who may, even now, reveal some secrets which the Fox of Libya – along with Gordon Brown and the Attorney General for Scotland, for all are equal on the Gaddafi world stage – would rather we didn’t know about.

And who knows what the Green Book Archives – and please, O insurgents of Libya, do NOT in thy righteous anger burn these priceless documents – will tell us about Lord Blair’s supine visit to this hideous old man; an addled figure whose “statesmanlike” gesture (the words, of course, come from that old Marxist fraud Jack Straw, when the author of Escape to Hell promised to hand over the nuclear nick-nacks which his scientists had signally failed to turn into a bomb) allowed our own faith-based Leader to claim that, had we not smitten the Saddamites with our justified anger because of their own non-existent weapons of mass destruction, Libya, too, would have joined the Axis of Evil.

Alas, Lord Blair paid no heed to the Gaddafi “whoops” factor, a unique ability to pose as a sane man while secretly believing oneself – like miss-a-heart-beat Omar Suleiman in Cairo – to be a light bulb. Only days after the Blair handshake, the Saudis accused Gaddafi of plotting – and the details, by the way, were horribly convincing – to murder Britain’s ally, King Abdullah of Saudi Arabia. But why be surprised when the man most feared and now most mocked and hated by his own vengeful people wrote, in the aforesaid Escape to Hell that Christ’s crucifixion was a historical falsehood and that – as here I say again, a faint ghost of truth does very occasionally adhere to Gaddafi’s ravings – a German “Fourth Reich” was lording it over Britain and America? Reflecting on death in this thespian work, he asks if the Grim Reaper is male or female. The leader of the Great Libyan Arab People’s Popular Masses, needless to say, seemed to favour the latter.

As with all Middle East stories, a historical narrative precedes the dramatic pageant of Gaddafi’s fall. For decades, his opponents tried to kill him; they rose up as nationalists, as prisoners in his torture chambers, as Islamists on the streets of – yes! – Benghazi. And he smote them all down. Indeed, this venerable city had already achieved its martyrdom status in 1979 when Gaddafi publicly hanged dissident students in Benghazi’s main square. I am not even mentioning the 1993 disappearance of Libyan human rights defender Mansour al-Kikhiya while attending a Cairo conference after complaining about Gaddafi’s execution of political prisoners. And it is important to remember that, 42 years ago, our own Foreign Office welcomed Gaddafi’s coup against the effete and corrupt King Idriss because, said our colonial mandarins, it was better to have a spick-and-span colonel in charge of an oil state than a relic of imperialism. Indeed, they showed almost as much enthusiasm as they did for this decaying despot when Lord Blair arrived in Tripoli decades later for the laying on of hands.

As a Libyan opposition group told us years ago – we didn’t care about these folks then, of course – “Gaddafi would have us believe he is at the vanguard of every human development that has emerged during his lifetime”.

All true, if now reduced to sub-Shakespearean farce. My kingdom for a facelift. At that non-aligned summit in Belgrade, Gaddafi even flew in a planeload of camels to provide him with fresh milk. But he was not allowed to ride his white charger. Tito saw to that. Now there was a real dictator.