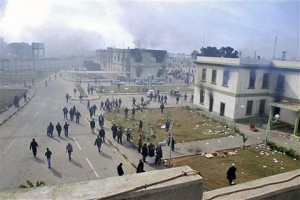 At least 60 people were killed in clashes in Tripoli on Monday as anti-government protests that began in eastern Libya spread to the capital. The protests appeared to be gathering momentum, with demonstrators saying they had taken control of several key towns in the country.

“Libya is at a crossroads. If we do not agree today on reforms … rivers of blood will run through Libya,” Saif al-Islam Gaddafi, son of the Libyan leader, said in a speech on Monday.

“We will take up arms … we will fight to the last bullet. We will destroy seditious elements. If everybody is armed, it is civil war, we will kill each other… Libya is not Egypt, it is not Tunisia.”

Although government restrictions have complicated the task of compiling a tally, Human Rights Watch said 233 had been killed since last Thursday while the International Federation for Human Rights (IFHR) put the toll at 300-400.

The fighting is believed to be the first serious violence in Tripoli since the unrest began. Amateur video and witness accounts tell of gunfire, looting – allegedly by security forces – and general fear in the city.

Information is severely restricted by the Libyan government. The Internet is largely shut down and mobile phone systems are working intermittently, making reports difficult to verify independently.

In Benghazi, the eastern Libyan city where the protests started, witnesses say some in the security services have switched sides and are now taking up the anti-government banner of the protesters.

Gaddafi: “Libya is not Egypt”

One of the sons of Libyan leader Moammar Gaddafi addressed the nation early Monday. Saif al-Islam Gaddafi warned of civil war and a fight to the last man if the unrest continues. The younger Gadhafi blamed Islamic extremists, foreign elements, and criminals of being behind the unrest. He also warned that continued protests jeopardize revenue from the nation’s oil reserves – the largest in Africa.

But Saif al-Islam Gadhafi, considered a moderating influence among his father’s advisers, also spoke about the possibility of reforms, including dialogue and changes to the constitution. He promised a conference on constitutional reforms within two days and said Libyans should “forget oil and petrol” and prepare themselves for occupation by “the West” if they failed to agree.

Like revolts earlier this year in Egypt and Tunisia, protesters in Libya have similarly called for Muammar Gaddafi’s ousting, but his son warned against this, saying “Libya is different, if there is disturbance it will split into several states”.

“You can say we want democracy and rights, we can talk about it, we should have talked about it before. It’s this or war. Instead of crying over 200 deaths, we will cry over hundreds of thousands of deaths.

But his statements have failed to hinder demonstrations. Protesters say they have taken control of several key towns, including the eastern city of Benghazi. Al Bayda and Sabha were also said to have been taken over by protesters.

Amateur video show people described as demonstrators in control of what appears to be military-style weaponry, indicating that they either have been given, or seized part of the government’s arsenal.

News of the spreading violence came as a privately run Libyan newspaper reported that the country’s justice minister had resigned over the deadly force used against protesters.

Ahmad Jibreel, a Libyan diplomat, spoke to Al Jazeera on Monday and confirmed that the minister had sided with the protesters.

“I was speaking to the minister of justice just a few minutes ago… he told me personally, he told me he had joined the supporters. He is trying to organise good things in all cities,” he said.

Jibreel also told Al Jazeera that key cities near Libya’s border with Egypt were now in the hands of protesters, which he said would enable foreign media to now enter the country.

“This means that the more Gaddafi kills people, the more people go into the streets.”

“That is very dangerous coming from someone who doesn’t even hold an official role in Libya – so in so many ways, this could be the beginning of a nightmare scenario for Libya if a despotic leader puts his son on air in order to warn his people of a bloodbath if they don’t listen to the orders or the dictates of a dictators.”