Back to business in Egypt 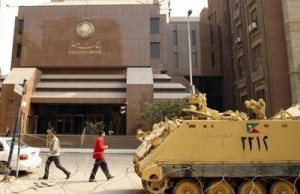 Banks across Egypt threw open their doors Sunday, returning to business after an almost weeklong closure mandated by the central bank because of strikes and labor protests that have hampered efforts to reboot the nation’s economy.

It marked the second time in three weeks that Egypt’s banks have reopened after a state-ordered closure, highlighting the uncertainty that prevails in the country more than a week after mass demonstrations toppled longtime President Hosni Mubarak. An earlier attempt to open the banks and establish a semblance of normalcy during the height of the anti-government protests lasted only a week before the lenders were ordered shut.

Reopening the banks is a critical step in returning to business as usual in a country where the sense of hope sparked by Mubarak’s ouster is tempered by the frustration that comes with crafting a new political framework while also trying to allow people to move on with their lives.

But it is just as crucial for the economy, which already has been badly hit by the 18 days of unrest that ended with the military takeover on Feb. 11. The government has estimated the total losses during the unrest at over 10 billion Egyptian pounds ($1.7 billion), with more than half of that linked to the vital tourism sector.

Keeping the banks shuttered, aside from impeding daily business for a range of Egyptian companies, had also served to further undercut investor sentiment in the Arab world’s most populous nation. Rebuilding that confidence will be one of the military’s top priorities, along with ensuring security and stability.

“I think we’re back to business,” said Wael Ziada, head of research at the Cairo-based Mideast investment bank EFG-Hermes. He added that barring any major problems, he did not think the central bank will close lenders again.

The focus now will be on taking “measures to safeguard the banks from a contagion effect,” he said.

Officials at the stock exchange, which has been shuttered for three weeks, said Saturday that the market would announce an opening date later and that it was putting procedures in place to prevent “market troubles” and allow for the bourse’s “gradual return to normal operation.” The market had been scheduled to restart on Feb. 16, but the date was pushed back with the closure of the banks.

Analysts say they expect the exchange to resume its operations later this week, barring another closure of the banks or some unforeseen development that triggers new unease.

Exchange officials had already set up new measures aimed at helping stave off what many had initially feared would be a market collapse. But global depository receipts of some of the country’s largest companies that are traded on the London Stock Exchange have fared relatively well, indicating that the fears of a panic sell-off may be significantly overstated.

That leaves Egyptian officials now facing the daunting task of rebuilding the economy.

The government’s statistical bureau said about 210,000 tourists fled the country in the last week of January, costing Egypt about $178 million. Cancellations for February, however, add up to an estimated revenue loss of $825 million, according to the bureau.

Those figures compare with manufacturing sector losses of $635 million for the week of Jan. 28 to Feb. 5, with production in key industrial zones dropping 60 percent. Construction sector losses for the same period are estimated at about $130 million.

The losses, which continue, have dampened forecasts for Egypt’s economic growth.

EFG-Hermes said it projects the country’s economy will contract 2.5 percent in calendar year 2011, while Beltone Financial, another Cairo-based investment bank, has revised its forecast for fiscal year 2010-2011 down to 3.5 percent. Just two months ago, the government had been forecasting growth of almost 6 percent for the fiscal year.