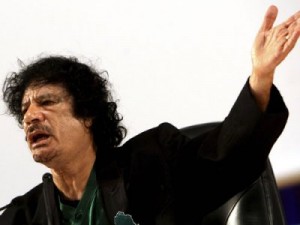 Colonel Muammar Gaddafi is confronting the most serious challenge to his 42-year rule as leader of Libya by unleashing his army on unarmed protesters.

Unlike the rulers of neighbouring Egypt, Gaddafi has refused to countenance the politics of disobedience, despite growing international condemnation, and the death toll of demonstrators nearing 100.

The pro-government Al-Zahf al-Akhdar newspaper warned that the government would “violently and thunderously respond” to the protests, and said those opposing the regime risked “suicide”.

William Hague, the UK’s foreign secretary, condemned the violence as “unacceptable and horrifying”, even as the Libyan regime’s special forces, backed by African mercenaries, launched a dawn attack on a protest camp in the eastern Libyan city of Benghazi.

Britain is scrambling to extricate itself from its recently cosy relationship with Gaddafi, initiated by then prime minister Tony Blair in 2004. That rapprochement saw Libya open its doors to British oil companies in exchange for becoming a new ally in the “war on terror” while Britain sold Gaddafi arms.

Hague’s outspoken comments came a day after the government revoked arms export licenses to both Bahrain and Libya for their use of deadly force against protesters calling for a change in the regime.

With internet services in Libya shut off for long periods, foreign journalists excluded and access already blocked to social networking sites, Gaddafi appeared determined to quell a revolt centred in the country’s east, which has long suffered a policy of deliberate economic exclusion.

Libya has also jammed the signals of Al-Jazeera, the Arab broadcaster to the country. Reports from inside the country claimed pro-regime forces had deliberately aimed at protesters’ heads.

That allegation appeared to be supported by shocking video footage smuggled out of the country which seems to show two unarmed protesters being shot in the head.

Hague said: “Governments must respond to legitimate aspirations of their people, rather than resort to the use of force, and must respect the right to peaceful protest.

“I condemn the violence in Libya, including reports of the use of heavy weapons fire and a unit of snipers against demonstrators. This is clearly unacceptable and horrifying.

“Media access has been severely restricted. The absence of TV cameras does not mean the attention of the world should not be focused on the actions of the Libyan government.”

At least five cities in eastern Libya have seen protests and clashes in recent days. Special forces attempted to break up a protest camp that included lawyers and judges outside Benghazi’s courthouse. “They fired tear gas on protesters in tents and cleared the areas after many fled carrying the dead and the injured,” one protester said.

A mass funeral for 35 people who died on Friday came under fire from pro-government snipers who killed one person at the procession and injured a dozen more, according to sources in the city.

The shootings came amid credible reports of a round-up of government opponents who were taken from their homes in raids by security forces.

The crackdown has been led by the elite Khamis Brigade, led by Gaddafi’s youngest son. Unconfirmed reports claim that force has been backed by African mercenaries brought into the country in five separate flights.

A video on the Libya 17th February website appeared to show an injured African mercenary who had captured by anti-government protesters.

Protests have so far been centred on Benghazi and the towns of Bayda, Ajdabiya, Zawiya, and Derna while Tripoli has remained so far calm but tense.The latest events in Libya have come against the background of continuing protests across the Middle East and North Africa.

In Bahrain, which has also seen attempts to put down pro-democracy protests with lethal force in recent days, anti-government protesters swarmed back to a symbolic square on Saturday, putting riot police to flight after the army was withdrawn.

A wave of protests has spread through the Middle East and North Africa after rebellions in Tunisia and Egypt toppled their long term leaders.

In Yemen today riot police shot dead a protester and injured five others after opening fire on thousands of marchers.