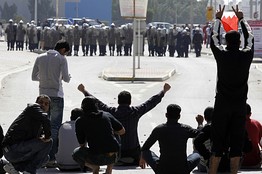 Senior members of the Wefaq bloc said the government must resign first and troops should be withdrawn from the streets of the capital Manama.

At least 50 people were wounded on Friday following the funerals for four protesters killed on Thursday.

The prince, who earlier called on protesters to withdraw from the streets, is authorised to talk to all parties, a statement from the ruling house said.