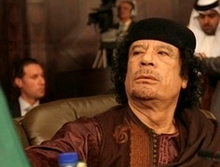 An exile from Libya living in Switzerland tells swissinfo.ch that it is unclear whether protests in the North African state can unseat Moammar Gaddafi from power.

Ahmed el-Gasir of the Geneva-based, non-governmental organisation, Human Rights Solidarity, said the Libyan leader’s control of the army and security forces appeared to be shaky.

For three days, protesters have been calling for the departure of Colonel Gaddafi – the longest serving Arab potentate.

A call made on the internet several weeks ago for a “day of rage” on February 17, was followed in several towns and villages across the country, particularly in Benghazi in the east of the country.

This city has long been a thorn in the side of the Libyan leader. It was only lukewarm in its support for Gaddafi’s military coup in 1969 and has benefited little from Libya’s oil wealth.

swissinfo: Can you explain why these demonstrations are taking place now?

Ahmed el-Gasir: This is a country that has been run by a dictatorship for 41 years. Following Tunisia and Egypt, the people have finally broken the fear barrier.

swissinfo: But the Libyan people are not demonstrating because they are hungry.

A.G.: The economic situation is very bad because the country is very poorly managed. This is a rich country but you have – according to official estimates – a 22 per cent youth unemployment rate. There are thousands of people graduating and not finding jobs. But unofficial estimates put the figure at 30 per cent or even a little higher.

This is also a country that is being run without a constitution. There have been promises for 10 years to have a constitution. And it’s being run by a political model that is based on the ideas of the dictator. In reality, they have something like a parliament – the General People’s Congress – which has issued a law called the revolutionary legitimacy, by which all the directives and ideas from the Libyan leader are binding by law and must be adhered to. People are yearning for freedom; yearning to have a better future.

swissinfo: What we are seeing now is that the largest demonstrations are not taking place in the capital, Tripoli, but Benghazi. How can you explain that?

A.G.: Benghazi is historically a restless city. It has been resisting the regime since the early 1970s. But since Tripoli is the centre of power they (security forces) have a heavy presence there. I have heard that there have been small demonstrations in two suburbs of Tripoli and a nearby town.

swissinfo: The revolutions in Tunisia and Egypt were in a way facebook and Twitter revolutions. Is there also a generation of young people in Libya who communicate using these social networks?

swissinfo: What do you think the role of the army is in this process? Is it eager to behave like the armies in Tunisia and Egypt and not use force to suppress the demonstrations, or is it too entangled with the Gaddafi family, and will remain loyal?

A.G.: Gaddafi came from the army. But for 12 years he has marginalised the army. And he has set up what’s called security battalions. They have more power and privileges than the official army, which he has weakened a lot.

We know that in Benghazi and al-Bayda some members of the security battalions refused to use force. So he has used two options: deploying a special police force and resorting to using criminal elements of society, which have been given money and cars and have been organised to attack demonstrators. This is a sign that he has no support from the official security forces.

He’s either keeping the battalions for later use or he has lost their support, so he’s resorting to criminal elements. In al-Bayda, which is 200km east of Benghazi, the people there defeated the central police force on Wednesday, so on Thursday morning two planeloads of soldiers from a special battalion which is commanded by Gaddafi’s youngest son were flown in. These forces are not Libyans – they don’t speak Arabic, but only French – and they caused havoc in al-Bayda on Thursday afternoon causing the death of 30 demonstrators.

swissinfo: Do you think that these demonstrations could eventually lead to the end of Gaddafi’s rule?

A.G.: If other cities join in the demonstrations. On Thursday for example we had people in about ten towns that came out against him. They have been very vocal. And there have also been demonstrations in suburbs of Tripoli. If they spread, I think he will lose control.

swissinfo: What kind of reaction do you expect from the international community?

A.G.: We expect that they withdraw political support for the Libyan regime. This is a regime that has a history of disrespecting the human rights of its citizens. It must be made clear to Gaddafi he has to stop in order to prevent a massacre.

swissinfo: Do you expect more than words, for example from the United States, but also action?

A.G.: They should threaten him with the International Criminal Court. What’s going on amounts to a crime against humanity. In one single day, on Thursday, around 60 people were killed and over three days the total is between 70 and 80. This is a small country and in Benghazi at most 10,000 people will join the demonstrations, so this is a large proportion of killings. swissinfo.ch