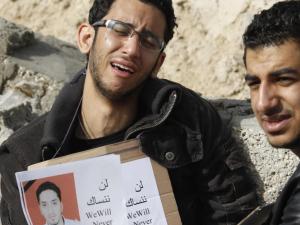 At least 24 protestors have been killed and many more wounded by Libyan security forces who cracked down on peaceful protests on Thursday, according to Human Rights Watch.

Hundreds of protestors took the streets of Baida, Benghazy, Zenten, Derna, and Ajdabiya in peaceful protest and were, according to multiple witnesses, shot and killed by Libyan security forces in an attempt to disperse the crowds.

According to Human Rights Watch, some of the worst cases of violence took place in Baida where overwhelmed hospital staff called for additional medical supplies to aid 70 injured protestors, half of whom were in a critical condition due to gun shot wounds.

Thursday’s protests were said to be a “new protest”, which began after noon prayers and the funerals of those killed on February, 16.

Families of those killed were joined by hundreds of other anti-Gaddafi protestors who chanted “Down the regime” and “Get out Muammer Gaddafi” as they marched toward the Internal Security Office, one protestor said.

An injured protester at a hospital in Baida told Human Rights Watch that he was sitting near the intensive care unit there and had confirmed that security forces had shot dead 16 people and wounded dozens of others. He said that Special Forces and armed men in street clothes fired live ammunition to deter protesters.

“The security forces’ vicious attacks on peaceful demonstrators lay bare the reality of Muammar Gaddafi’s brutality when faced with any internal dissent,” said Sarah Leah Whitson, Middle East and North Africa director at Human Rights Watch. “Libyans should not have to risk their lives to make a stand for their rights as human beings.”

A protester in Benghazi said that hundreds of lawyers, activists, and other protesters gathered on the steps of the Benghazi Court calling for a constitution and respect for the rule of law. Early in the day, sources in Libya said that security forces had arrested a Benghazi journalist, Hind El Houny, and Salem Souidan, a family member of a group that has been seeking justice for the massacre of inmates in Abu Salim prison in 1996. Security forces also arrested a former political prisoner, Abdel Nasser al-Rabbasi, in Bani Walid.

According to protestors who spoke to Human Rights watch, on Wednesday security forces attacked peaceful protestors with teargas and live ammunition, shooting dead two protestors. The government is also suspected of coordinating pro-government supporters to confront demonstrations after it was revealed that subscribers of Libyana, one of two mobile cellphone networks in Libya, received a text message calling upon “nationalist youth” to go out and “defend national symbols” that Wednesday.

“It is remarkable that Gaddafi is still copying the very same tactics that failed Hosni Mubarak so completely just across the border,” Whitson said. “Using security forces and armed thugs to deny people the right to express their opposition to the government increasingly looks destined to fail.” – IOL Reporter

photo: At least 24 protestors have been killed and many more wounded by Libyan security forces who cracked down on peaceful protests, according to Human Rights Watch. Photo: Reuters