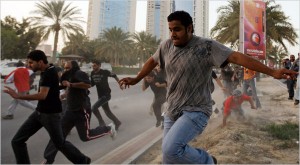 Government forces opened fire on hundreds of mourners marching toward Pearl Square Friday, sending people running away in panic amid the boom of concussion grenades. But even as the people fled, at least one helicopter sprayed fire on them and a witness reported seeing mourners crumpling to the ground.

It was not immediately clear what type of ammunition the forces were firing, but some witnesses reported live fire from automatic weapons and the crowd was screaming “live fire, live fire.” At a nearby hospital, witnesses reported seeing people with very serious injuries and gaping wounds, at least some of them caused by rubber bullets that appeared to have been fired at close range.

Even as ambulances rushed to rescue people, forces fired on medics loading the wounded into their vehicles.

A Western official said at least one person had died in the mayhem surrounding the square, and reports said at least 50 were wounded. The official quoted a witness as saying that the shooters were from the military, not the police, indicating a hardening of the government’s stance against those trying to stage a popular revolt.

The mourners who were trying to march on symbolic Pearl Square were mostly young men who had been part of a funeral procession for a protester killed in an earlier crackdown by police.

Minutes after the first shots were fired, forces in a helicopter that had been shooting at the crowds, opened fire at a Western reporter and videographer who were filming a sequence on the latest violence.

At least seven people had died in clampdowns before Friday’s violence.

The chaos has left the Obama administration in the uncomfortable position of dealing with a strategic Arab ally locked in a showdown with its people.

The protests in Bahrain started Monday, inspired by the overthrow of autocratic governments in Egypt and Tunisia. The Bahraini government initially cracked down hard, then backed off after at least two deaths and complaints from the United States. But since Thursday morning, security forces have shown little patience with the protesters, first firing on demonstrators sleeping in Pearl Square early Thursday morning, killing at least five, and then shooting today at those who gathered to mark an earlier death.

The violence appeared to be transforming the demands of the protesters who early on were calling for a switch from an absolute monarchy to a constitutional one. On Thursday, the opposition withdrew from the Parliament and demanded that the government step down. And on Friday, the mourners were chanting slogans like “death to Khalifa,” referring to King Hamad bin Isa al-Khalifa.

The protests here, while trying to mimic those in Egypt and Tunisia, add a dangerous new element: religious division. The king and the ruling elite of Bahrain are Sunni, while the majority of the population are Shiites, who have been leading the demonstrations and demanding not only more freedom but equality.

The king is distrustful enough of his Shiite subjects that many of his soldiers and police are foreigners hired by the government.

On Friday, in the village of Sitra, south of Manama, a crowd of thousands accompanied the coffins of Ali Mansour Ahmed Khudair, 53, and Mahmoud Makki Abutaki, 22, both killed by shotgun fire on Thursday.

The coffins were carried on the roofs of two cars as a man with a loudspeaker led the crowd in its chants from the bed of a pickup truck, alternating between calls to the faithful — “There is no God but God” — with political messages such as “We need constitutional reform for freedom.”

In the sun-scorched, sandy cemetery with its crumbling white headstones, the bodies were laid to rest on their sides so that they faced the Muslim holy city of Mecca in Saudi Arabia. “Have you seen what they have done to us,” said Aayat Mandeel, 29, a computer technician. “Killing people for what? To keep their positions?”

After the burials, the crowds moved off to a major mosque for noon prayers on the Muslim holy day, an occasion that has provided a focus for protests elsewhere in the region. But it was not clear whether religious leaders would urge them to continue their demonstrations.

For the Obama administration, the violence in this tiny Persian Gulf State was the Egypt scenario in miniature, a struggle to avert broader instability and protect its interests — Bahrain is the base of the Navy’s Fifth Fleet — while voicing support for the democratic aspiration of the protesters.

Before Friday’s violence, the United States said it strongly opposed the use of violence. Secretary of State Hillary Rodham Clinton called Bahrain’s foreign minister on Thursday morning to convey “our deep concern about the actions of the security forces,” she said. President Obama did not publicly address the Thursday crackdown, but his press secretary, Jay Carney, said that the White House was urging Bahrain to use restraint in responding to “peaceful protests.”

In some ways, the administration’s calculations are even more complicated here, given Bahrain’s proximity to Saudi Arabia, another Sunni kingdom of vital importance to Washington, and because of the sectarian nature of the flare-up here.

This has broader regional implications, experts and officials said, since Saudi Arabia has a significant Shiite minority in its eastern, oil-producing districts and the Shiite government in Iran would like to extend its influence over this nearby island kingdom. Shiite political figures in Bahrain deny that their goal is to institute an Islamic theocracy like that in Tehran.

For those who were in the traffic circle known as Pearl Square Thursday when the police opened fire without warning on thousands who were sleeping there, it was a day of shock and disbelief. Many of the hundreds taken to the hospital were wounded by shotgun blasts, doctors said, their bodies speckled with pellets or bruised by rubber bullets or police clubs.

Doctors said that at least two others had died and that several patients were in critical condition with serious wounds. Muhammad al-Maskati, of the Bahrain Youth Society for Human Rights, said he had received at least 20 calls from frantic parents searching for young children.

A surgeon, who asked not to be identified for fear of reprisals, said that for hours on Thursday the Health Ministry prevented ambulances even from going to the scene to aid victims. The doctor said that in the early morning, when the assault was still under way, police officers beat a paramedic and a doctor and refused to allow medical staff to attend to the wounded. News agencies in Bahrain reported that the health minister, Faisal al-Hamar, resigned after doctors staged a demonstration to protest his order barring ambulances from going to the square.

In the bloodstained morgue, Ahmed Abutaki, 29, held his younger brother’s cold hand, tearfully recalling the last time they spoke Wednesday night. “He said, ‘This is my chance, to have a say, so that maybe our country will do something for us,’” he recalled of his brother’s decision to camp out in the circle. “My country did do something; it killed him.”

There was collective anxiety as Friday approached and people waited to see whether the opposition would challenge the government’s edict to stay off the streets. The government had made it clear that it would not tolerate more dissent, saying it would use “every strict measure and deterrent necessary to preserve security and general order.” Both sides said they would not back down.

“You will find members of Al Wefaq willing to be killed, as our people have been killed,” said Khalil Ebrahim al-Marzooq, one of 18 opposition party members to announce Thursday that they had resigned their seats. “We will stand behind the people until the complete fulfillment of our demands.”

Arab leaders have been badly shaken in recent days, with entrenched leaders in Egypt and Tunisia ousted by popular uprisings and with demonstrations flaring around the region. And now as the public’s sense of empowerment has spread, the call to change has reached into this kingdom. That has raised anxiety in Saudi Arabia, which is connected to Bahrain by a bridge, and Kuwait, as well, and officials from the Gulf Cooperation Council met here to discuss how to handle the crisis.

After the meeting — and before Friday’s clampdown — the council issued a statement supporting Bahrain’s handling of the protests. It also suggested that outsiders might have fomented them, in a clear effort to suggest Iranian interference.

“The council stressed that it will not allow any external interference in the kingdom’s affairs,” said the statement, carried on Bahrain’s state news agency, “emphasizing that breaching security is a violation of the stability of all the council’s member countries.”

“The Saudis are worried about any Shia surge,” said Christopher R. Hill, who retired last year as United States ambassador to Iraq, where he navigated tensions between Sunnis and Shiites. “To see the Shia challenging the royal family will be of great concern to them.”

Still, Mr. Hill said there was little evidence that Arab Shiites in Bahrain would trade their king for Iranian rulers.

Bahrain’s king, Hamad bin Isa al-Khalifa, and his family have long been American allies in efforts to fight terrorism and push back the regional influence of Iran. In diplomatic cables made public by WikiLeaks, he urged American officials to take military action to disable Iran’s nuclear program.

While Bahrain has arrested lawyers and human rights activists over the last two years, it had taken modest steps to open up the society in the eight years before that, according to Human Rights Watch. King Hamad allowed municipal and legislative elections last fall, for which he was praised by Mrs. Clinton during a visit to Bahrain in December.

In the streets, however, people were not focused on geopolitics or American perceptions of progress. They were voicing demands for democracy, rule of law and social justice.