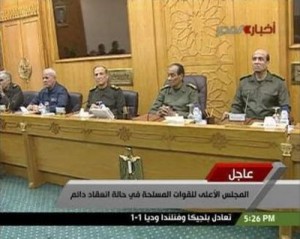 The military leaders now governing Egypt have told a coalition of young opposition leaders that they plan to convene a panel of distinguished jurists to submit a package of constitutional amendments within 10 days for approval in a national referendum within two months, setting a breakneck schedule for the transition to civilian role.

Confronting more immediate challenges, the governing Supreme Military Council issued a communiqué on Monday urging labor leaders to end the strikes that have broken out in the aftermath of the revolution.

The statement, read on state television, seemed aimed not just at strikes against private industry but also at a fresh wave of smaller demonstrations by state employees, including ambulance drivers, journalists, police officers and transport workers, demanding better pay and working conditions. Several hundred police officers demonstrated in the square — not, as at the beginning of the revolt, to suppress protest, but to seek better working conditions and public sympathy.

How completely the military will deliver on its promises of a transition to a constitutional democracy will not be clear until the election, currently set for six months from now. But the young revolutionaries — most in their early 30s — were clearly impressed by the deference they received from the two military officials, Maj. Gen. Mahmoud Hijazi and Maj. Gen. Abdel Fattah.

The two generals sat down Sunday night to talk about their country’s future with seven of the revolution’s young organizers — including the Google marketing executive Wael Ghonim — and the young activists posted their notes on the meeting directly to the Internet for the Egyptian public to see.

“We all sensed a sincere desire to preserve the gains of the revolution and unprecedented respect for the right of young people to express their views,” two of the young organizers, Mr. Ghonim and Amr Salama, wrote in their Facebook posting, with the disclaimer that they were speaking only for themselves. They noted that the generals spoke without any of the usual “parental tone (you do not know what is good for you, son),” and called the encounter “the first time an Egyptian official sat down to listen more than speak.”

There were indications Monday that Egypt’s ousted president, Hosni Mubarak, could be having medical problems. Egypt’s ambassador to the United States, Sameh Shoukry, said in an interview on the Today Show that Mr. Mubarak was “possibly in somewhat of bad health.”

The former president, 82, has had health problems in recent years, and had his gallbladder removed last year in Germany. Yet he had appeared vigorous in public appearances before the start of the uprising that ended his nearly three decades in power.

There were conflicting reports about his condition in the Egyptian news media on Monday, with some papers reporting that he was depressed, refusing medication and slipping in and out of consciousness at his home in the Red Sea resort of Sharm el-Sheikh, The Associated Press reported. Others had him flying to the United Arab Emirates for medical attention, while still others said he was in Germany, something the German government strongly denied.

Mr. Mubarak’s ouster spread shock waves around the region, as many autocratic regimes braced for the possibility of protests modeled on the uprisings in Egypt and Tunisia.

In Bahrain, skirmishes broke out early Monday between heavily armed police and scattered groups of young people in villages outside the capital. Shops stayed closed and shuttered, the streets were clear of cars and there were calls for universities to close in anticipation of what organizers here have called Bahrain’s own “Day of Rage.” Young protesters took to the streets for a fourth successive day in Yemen.

In Iran, the authorities deployed hundreds of riot police to thwart plans by the opposition to hold its first major rally on Monday since the government quashed a wave of protests after the disputed presidential elections in 2009. A reformist Web site said Iranian authorities cut the phone lines of an opposition leader, Mir Hussein Moussavi, and cordoned off his house on Monday.

Opposition groups in Algeria met Sunday and vowed to hold weekly protests against the government in the capital, Algiers, said the head of the Algerian League for the Defense of Human Rights, Mustapha Bouchachi. About 300 people were arrested Saturday at a demonstration in the heart of the city that was stifled by a heavy police presence, the human rights league and other opposition groups said.

Since Sunday, Egypt has been effectively under direct military authority, thrusting the country into territory uncharted since republican Egypt was founded in 1952. Though enjoying popular support, the military must cope with the formidable task of negotiating a post-revolutionary landscape still basking in the glow of Mr. Mubarak’s fall, but beset by demands to ease Egyptians’ many hardships.

Since seizing power on Friday, the military has struck a reassuring note, responding in words and actions to the platform articulated by hundreds of thousands in Tahrir Square. But beyond more protests, there is almost no check on the sweep of military rule. While opposition leaders in Egypt welcomed the military’s moves, some have quietly raised worries about the future role of an institution that has been a pillar of the status quo, playing a crucial behind-the-scenes role in preserving its vast business interests and political capital.

Nevertheless, the military’s statement on Sunday was the clearest elaboration yet of its plans for Egypt, as the country’s opposition forces, from the Muslim Brotherhood to labor unions, seek to build on the momentum of the protests and create a democratic system with few parallels in the Arab world.

The moves to suspend the Constitution and to dissolve Parliament, chosen in an election deemed a sham even by Mr. Mubarak’s standards, were expected. The statement declared that the supreme command would issue laws in the transitional period before elections and that Egypt’s defense minister, Field Marshal Mohamed Hussein Tantawi, would represent the country, in a sign that the 75-year-old loyalist of Mr. Mubarak’s had emerged to the forefront. Protesters — and some classified American diplomatic cables — have dismissed him as a “poodle” of Mr. Mubarak’s. But some senior American officers say he is a shrewd operator who played a significant role in managing Mr. Mubarak’s nonviolent ouster.

The military’s communiqué was welcomed by opposition leaders as offering a specific timetable for transition to civil rule. Ayman Nour, a longtime opponent of Mr. Mubarak’s, called it a victory for the revolution. “The statement is fine,” said Ahmed Maher, a leading organizer. “We still need more details, but it was more comforting than what we heard before.” But still unanswered are other demands of the protesters, among them the release of thousands of political prisoners. The military’s position on the emergency law, which gave Mr. Mubarak’s government wide powers to arrest and detain people, has remained ambiguous. The military said earlier that it would abolish it once conditions improved, but has yet to address it since. Essam al-Arian, a prominent Brotherhood leader, echoed those demands, saying their fulfillment “would bring calm to the society.”

“To be able to trust the army completely and do what it says completely is impossible because the country has had corrupted institutions for 30 years working in every sector,” said Tamer el-Sady, one of the young organizers at Sunday’s meeting. The military has said the government of Prime Minister Ahmed Shafiq, appointed Jan. 29, will remain in place as a caretaker cabinet in the transition, though it reserved the right to dismiss some of the ministers. The cabinet met Sunday for the first time since Mr. Mubarak’s fall, notably with his once-ubiquitous portrait nowhere to be seen.

Other than Mr. Tantawi and Sami Anan, the army chief of staff, the military’s council remains opaque, with many in Egypt unable to identity anyone else on it. Omar Suleiman, the former vice president, has not appeared since Friday, and Mr. Shafiq said that the military would determine his role.