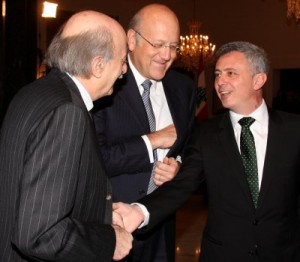 A team must be cohesive if it wishes to succeed. Its members must all share an understanding and a commitment to the goal so that they can execute the plays flawlessly. Unless they can communicate and cooperate selflessly then their efforts will not be in harmony and will result in missed plays and a record of bad calls.

Government cabinets are not any different. A cabinet must be composed of members that share a vision of what needs to be accomplished so that all ministries would align their policies and efforts in order to reinforce each other. Furthermore as challenges arise the discussions will be collegial and not antagonistic. These matters are elementary and are used as a guide in cabinet formations all over the world. Unfortunately, this very simple and obvious idea is not being heeded in Lebanon and the results have been simply disastrous. The last two Lebanese governments have failed to have any meaningful accomplishments in any field and have resulted in nothing else but governing paralysis and dogmatic infighting. These results were to be expected since the structure of the last two cabinets has been anything but homogenous; in a sense the members did not even speak the same language. The cabinets have resembled the biblical story about confusion, lack of effectiveness and disarray told about the Tower of Babel.

It has often been said that one must experience pain in order to appreciate happiness and chaos in order to seek coordination and cooperation. Although we can assume experience is the best teacher, some slow learners will get their fingers burnt repeatedly by touching the same hot service again and again. The best that can be said about the current crop of Lebanese politicians is that they appear to suffer of a serious learning disability that is preventing them from internalizing the lessons from the recent past two attempts at forming cabinets that are designed to fail.

March 14 had fought unsuccessfully the idea of sharing the cabinet with March 8 under PM Saniora and then repeated the mistake, under pressure, with PM Sa’ad Hariri. In both of these cases March 8, a group that is the antithesis of March 14, cannot be blamed for insisting to be included in the cabinet and be given veto powers. This brilliant policy transformed the parliamentary minority into the effective group whose approval is required for any and all government acts and it allowed the minority to demonstrate the inability of the majority to govern by preventing the majority from any accomplishments.

One would have hoped that this experience of ineffectiveness would make the idea of incongruous cabinet something to be shunned by all. Not so. A few of the March 8 allies are willing to form a cabinet that accommodates their adversaries and what is even more astonishing is that many in March 14 are also open to the idea of joining the Mr. Mikati cabinet as the blocking minority with a veto power.

Responsible governance should be the only guide and whoever is to form the cabinet must avoid at all costs the mistakes of the past. Mr. Mikati can demonstrate his ability to govern by assembling a group of either politicians or technocrats or possibly a combination of both provided that all the members share the same vision of what is good for the country and also share the vision of how to get there. Let the cabinet govern, let it be homogeneous and let it be held accountable to the parliament and to the public. It is time that we stop playing the silly unconstitutional games of allocating ministries to groups and political offices. A cabinet must be one colour and must not award the veto power to any group or even offer the president a group of ministries. That would be a gross violation of the constitution and will introduce another governing tradition that is misguided. A country is to be ruled by a set of laws embodied in its constitution.  If these laws do not offer the president any meaningful executive power then we have no choice but to obey these laws as long as they are in effect.

Lebanon needs to demonstrate its ability to respect its constitution by forming a government guided by and based on laws. This implies that those who have the most votes form a single colour cabinet and that whenever the constitution is violated then these alleged violations must be addressed. Lebanon would be doing itself, legitimacy and democracy a disservice if it does not clear up the issue of whether its current president, Michel Suleiman, has been constitutionally elected or not.