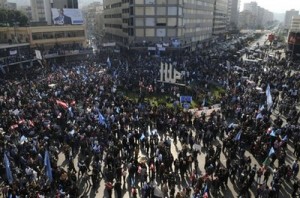 The call comes one day after the appointment of Hezbollah’s nominee Prime Minister-designate Najib Mikati.

“We call upon the Lebanese people to peacefully gather everyday at 6 p.m. at Martyrs Square to show recognition for March 14 MPs who remained unbending despite threats and pressure,” the statement said, referring to allegations that March 8 threatened some MPs to nominate Mikati instead of outgoing PM Saad Hariri.

March 14 said that it will support the Special Tribunal for Lebanon (STL) and call for disarming parties in the country in the coming phase.

“What is happening is a planned coup which brought Mikati to power under Hezbollah’s conditions,” the statement said.

“What happened was not a democratic practice… All the Lebanese people know this fact and laugh when the party that is terrorizing them with its arms talks about democracy,” the statement added, in a reference to Hezbollah.

Mikati, backed by March 8, was appointed to the premiership on Tuesday, giving Hezbollah and its allies increased leverage in the country and provoking widespread protests.

Hezbollah brought down Hariri’s government on January 12 after a long-running dispute over the STL’s investigation of former PM Rafik Hariri’s.

Mikati did confirm yesterday that he was nominated to protect Hezbollah. He told AFP on Tuesday : “My nomination by Hezbollah does not make me committed to any political stance other than protecting the Resistance.” This was a possible reference to Hezbollah’s five point plan.

Mikati was reportedly nominated by Hezbollah on Sunday following his meeting with Syrian president Bashar al Assad in Damascus Syria.