Bolton: Israel has until the weekend to bomb Iran’s nuclear plant

Israel has until the weekend to launch a military strike on Iran’s first nuclear plant before the humanitarian risk of an attack becomes too great, former U.S. Ambassador to the United Nations John Bolton said Tuesday.

A Russian company is expected to help Iran start loading nuclear fuel into its plant on Saturday, after which an attack on the Bushehr reactor could trigger harmful radiation, which Israel wants to avoid, Bolton said. So unless the Israelis act immediately to shut down the facility, it will be too late.

“Once it’s close to the reactor … the risk is when the reactor is attacked, there will be a release of radiation into the air,” Bolton told FoxNews.com. “It’s most unlikely that they would act militarily after fuel rods are loaded.”

Earlier Tuesday, Bolton told Fox Business Network the Israelis will have to move in the “next eight days” if they want to attack the Bushehr facility — a reference to the window between when the start-up was announced last week and the loading date. Bolton said Tuesday that the date has fluctuated, but he described the start-up as the ultimate deadline.

Michael Oren, Israel’s ambassador to the United States, told Fox News that the nation is hopeful sanctions — passed by the United Nations, European Union and United States — will “modify” Iran’s behavior. Oren said Israel is “committed” to the sanctions program and will assess its impact at a later date.

Though Iranian officials insist the reactor is for peaceful purposes, Bolton warned about the danger of the up-and-running reactor.

“What this does is give Iran a second route to nuclear weapons in addition to enriched uranium,” Bolton said. “It’s a very, very huge victory for Iran.”

Bolton, who was U.S. ambassador during the Bush administration, expressed doubt that Israel was planning a military strike but suggested it’s an open question.

“If they were going to do anything, they certainly wouldn’t be talking about it,” he said.

He noted that the reactor gives Iran something that both Iraq and Syria were never able to achieve because their facilities were destroyed. 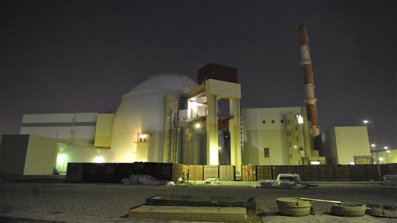 “Iran will have achieved something that no other opponent of Israel, no other enemy of the United States really in the Middle East has, and that is a functioning nuclear reactor,” he said on Fox Business Network.

Iranian officials on Tuesday warned Israel not to take military action. Iranian media quoted Ahmad Vahidi, Iran’s defense minister, as saying Israel would be taking a huge risk with such an attack.

“We may lose a power plant, but the whole existence of the Zionist regime will be jeopardized,” Vahidi was quoted as saying.

The reactor project has been in existence for decades, but the Russians have helped push it to the finish line. Russian state firm Rosatom announced last week that the Bushehr facility would be starting up on Aug. 21. According to the Iranian state Mehr news agency, the head of that company, Sergey Novikov, says the plant “just generates electricity.”