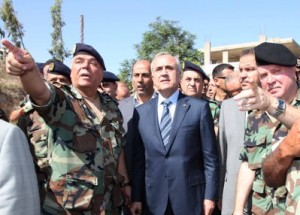 Suleiman also inspected the army base that was attacked by Israeli troops and met with the troops there. He was accompanied by Defense Minister Elias Murr.

Suleiman told the troops that the cabinet will put together a plan during its next session to arm the Lebanese military “with all that is necessary.”

“We have launched a counter-campaign to arm the military,” Suleiman said in the southern Lebanese town of Adaisseh in response to reported Israeli campaign to stop U.S. military assistance to Lebanon.

The cabinet plan will be put “despite the objections of several countries on this issue,” the president said.

Suleiman added: LAF is responsible for defending the country and Lebanon will work with friendly countries to provide it with more advanced equipment.

Arming the military is aimed at “protecting the dignity of the nation,” he said.

Suleiman commended the LAF on its performance during Tuesday’s fighting, saying it is necessary to resist Israeli aggression and cooperate with UNIFIL in the implementation of UN Security Council Resolution 1701.

Shehaitli reportedly told Suleiman that Lebanon asked UNIFIL to set rules on how to act at the U.N.-drawn Blue Line, particularly in disputed areas.

Americans for Peace Now (APN) reported that pressure appears to be mounting on Congress to punish Lebanon… It also appears that groundwork is being laid in advance to ensure US support for Israel in the case of another Lebanon war.

The American Israel Public Affairs Committee (AIPAC ) has reportedly circulated a memo arguing that the Lebanese Army is cooperating with Hezbollah, and stating that unless this stops, “Washington must reevaluate its relationship with the Beirut government and the Lebanese Armed Forces–the recipient of significant American military aid.”

Similarly, The Jewish Institute for National Security Affairs (JINSA) has reportedly circulated a memo implicitly bashing the Obama Administration for providing military aid to Lebanon (something that the Bush Administration did as well). The memo also appears to explicitly call for Israel to launch a new war in Lebanon and takes a shot at the Obama Administration in advance for being insufficiently supportive of such an action.

US State Department spokesperson Philip Crowley said on Friday that “there is no evidence that the Lebanese army used American-made weapons during the recent military clash with Israel,” Future News has reported.

Crowley reiterated “Washington’s commitment to continued support of the Lebanese government and strengthening the capacities of the Lebanese army,” saying that such support helps stabilize regional security and further American interests.