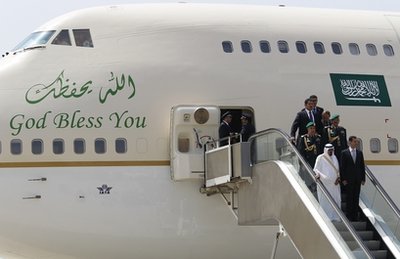 After a welcoming ceremony at the airport Suleiman, Abdullah and assad held a brief meeting at the airport before heading to Baabda palace for summit talks.

This is Abdullah’s first visit to Beirut as the Saudi king. He had attended the Arab summit in Beirut in 2002 when he was still the crown prince. He became the first Saudi monarch to visit the country since 1957.

As for Assad, this is his first visit since eight years . His visit comes after the resumption of normal ties between the two countries following five years of tension that erupted after Hariri’s assassination in February 2005.

An Nahar newspaper reported that around 250 people have been invited for a luncheon which will be hosted by president Suleiman.

But Baabda sources told LBC the presidential palace did not send an invitation to former presidents, including Gemayel and Lahoud, to attend the luncheon.

According to An Nahar, Phalange MPs and ministers who have been invited to the luncheon will boycott the gathering.