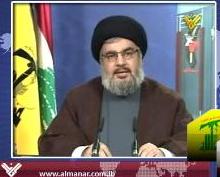 He admitted that Iran and Syria have been supporting the resistance but , but stressed that the” resistance only was doing the fighting.” He added :”It is too bad that Lebanon’s enemies realize the value of what Lebanon has more than others. That is why they conspire to end this untouchable power”.

He then said :” They may bargain on gas and oil but they can never bargain on the Resistance.”

He concluded that the “Resistance is the most precious of what we have. We will not allow any small or big person in this world to touch any of its dignity. ”

Nasrallah used the occasion to attack the Special Tribunal for Lebanon for the third time in 10 days.

He accused the UN investigation team of being formed from officers closely associated with Israeli Mossad spy agency :

“Should an Investigation Committee made of Americans and the British government where investigating officers are brought from intelligence services closely linked to the Mossad be entrusted with a big issue at this level?” , he said.

Nasrallah also attacked the March 14 leaders who were critical of his previous two speeches:

Nasrallah suggested setting up a Lebanese committee to investigate the issue of false witnesses, who he said “misled the investigation for 4 years.”

“Distortion of the Resistance, the dearest to us, will not be allowed,” he added.

Nasrallah said: “All of us in Lebanon want to know the truth behind Rafik Hariri’s assassination… We all paid the price of the repercussions of this assassination. We all support achieving justice, and not amnesty, after knowing the truth. All the Lebanese should cooperate on this.”

No one in Lebanon ever accused Hezbollah of ever behind the assassination of Lebanon’s former Prime Minister Rafik Hariri. All the fingers were pointed at Syria until a report showed up in the German Der Spiegel magazine dated May 2009 which revealed a link between Hezbollah and the assassination of Hariri , father of the current prime minister Saad Hariri.

Ever since that report was published there has been a lot of speculation in the media about Hezbollah indictments but none of this was ever confirmed by the STL. Most of so called ” leaks ” were reported by pro Hezbollah media such as the As Safir newspaper.

Ash Sharq al Awsat’s legal sources expressed surprise over the timing of the leaks which they said “lack credibility since they are not based on proper documentation” , because whoever knows (STL prosecutor Daniel ) Bellemare and his ability in maintaining complete silence , strict confidentiality and his way of dealing with the public knows very well that these leaks did not come from anyone at STL”

The sources added that what is being promoted by the media is shocking because some are now trying to undermine the indictments even before they are issued with the aim of ending the role of STL and preventing the prosecution of the perpetrators of the assassinations in Lebanon .

As Safir newspaper last Tuesday revealed that the STL will be issuing at least two rounds of the indictments starting from next September and around the end of this year. In the first round prosecutor Bellemare will reportedly indict three to five members of Hezbollah and in the second round about 20 with various ranks including some key officials.

Nasrallah admitted during his press conference last Thursday that some ( undisciplined) Hezbollah members may be indicted, but he would reject such indictments.

Nasrallah ‘s speeches have ignited tension again not seen since May 2008 following the cabinet decision on May 5, 2008 over outlawing Hezbollah’s private telcom network and the relocation of an airport officer who was closely associated with Hezbollah and who was accused of being behind the intelligence that led to the assassination of several Lebanese anti-Syrian leaders including former MP Gebran Tueni and Minister Pierre Gemayel.

Lebanese President Michel Suleiman has been calling for calm ever since Nasrallah made his first speech, but Hezbollah and its allies such as MP Michel Aoun, MP Talal Arslan and former minister Wiam Wahab have been escalating the tension by repeatedly attacking the tribunal .