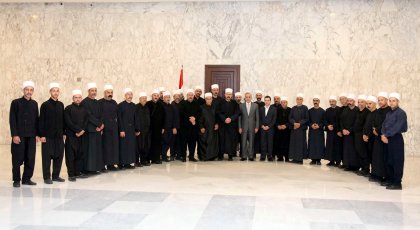 Minister of State Wael Abu Faour, who accompanied the delegation of Druze officials delivered a speech in which he thanked the President for his efforts “to facilitate the entry of the delegation to Lebanon.”

Suleiman welcomed the delegation and praised the Druze leadership for rejecting recruitment within the ranks of the enemy (Israeli) forces,” stressing “the need to keep their communication ongoing with the surrounding Arab counties ”

A four-day conference of the Druze diaspora , first of its kind, was held at Beirut International Exhibition and Leisure Center (BIEL) from Monday to Thursday .

“This congress aimed to unite the Druze, for we are a minority and must preserve our community without prejudice or racism,” said Kamil Sarieddine, who is in charge of the Lebanese Druze Council’s emigration affairs.

Attending the conference were 840 delegates from 37 countries, including the United States, Argentina, Sweden, Ukraine and Australia, organizers told reporters

Israel bans its citizens from visiting “enemy” states such as Lebanon as Israel remains technically in a state of war with it.

The Israeli Druze leaders, mostly sheikhs and religious leaders from northern villages in the the Galilee, departed last Saturday for Jordan, and continued to Lebanon through Syria.

The 35-member delegation said in a statement published Monday that it had not received permission to travel to Lebanon from the government or from the Interior Ministry.

The delegation is likely to face police questioning and legal hurdles upon returning to Israel.

Unlike other Palestinians the Druze refused to leave and stayed put in the occupied Palestinian territories following the 1948 war.

The majority of the Druze live in Lebanon, Syria, Jordan, Israel, US and Australia. 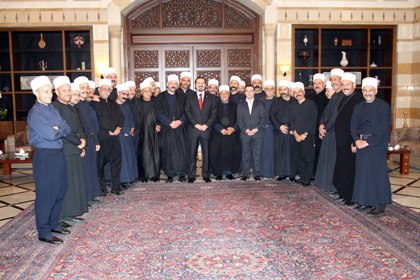