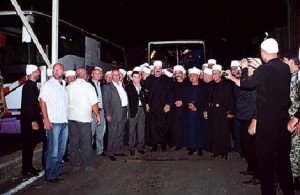 A four-day conference of the Druze diaspora , first of its kind, is being held at Beirut International Exhibition and Leisure Center (BIEL).

A delegation of Druze officials from Israel arrived in Lebanon on Monday to attend the conference. Minister of State Wael Abu Faour greeted the 35 member delegation pictured at the Masnaa border crossing.

Many of the participants are from the US, Canada, Brazil, Australia, Nigeria and the Gulf.

The conference is sponsored by the Druze Religious Council. Kamil Sarieddine, the head of the council’s Diaspora Committee said the event is aimed at supporting the “Druze of Palestine.”

“The principal political message of the conference is to support Druze who reject compulsory Israeli military service,” Abu Faour, a Druze minister and MP said yesterday.

Unlike other Palestinians the Druze stayed put in the occupied Palestinian territories following the 1948 war.

Participants in the event will address the needs of Druze expatriates, along with strengthening their ties to their motherland, according to Sarieddine.

Sarieddine also said that participants in the conference would encourage agricultural projects, along with small- and medium-scale projects in rural areas to support the presence of Druze in their villages.

Druze political leaders, Walid Jumblatt and Talal Arslan are expected to address the conference , but Wiam Wahab, a staunch ally of Syria and Hezbollah who was also invited refused to attend.

“I refused receiving the invitation letter to the conference… We wish for the goal of such a conference to be clarified,” Wahhab said on Monday

The agenda includes seminars on the current situation of expatriates, the economic situation in Lebanon, and Personal Status laws.

Israel bans its citizens from visiting “enemy” states such as Lebanon as Israel remains technically in a state of war with it.

The Israeli Druze leaders, mostly sheikhs and religious leaders from northern villages in the the Galilee, departed Saturday for Jordan, and continued to Lebanon through Syria.

The 30-member delegation said in a statement published Monday that it had not received permission to travel to Lebanon from the government or from the Interior Ministry.

The delegation said it had sent a request to Prime Minister Benjamin Netanyahu and to Interior Minister Eli Yishai, which went unanswered. However, Galilee police summoned one of the Druze leaders, Sheikh Aouni Khanifas, for questioning over allegations he was organizing a trip to an enemy state.

The delegation also said they did not appeal to the High Court of Justice for travel permits because that would have delayed their arrival.

The Israeli Druze leaders also said that Jordan and Syria made great efforts to ease the delegation’s entry into Lebanon.

The Israeli delegation is likely to face police questioning and legal hurdles upon returning to Israel.

The majority of the Druze live in Lebanon, Syria, Jordan, Israel, US and Australia.