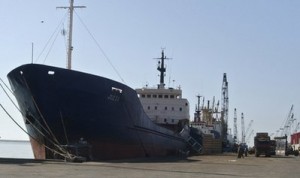 Israel is urging Lebanon and the international community to prevent two ships from sailing to Gaza from a Lebanese port to break Israel’s blockade of the Hamas-ruled Palestinian territory. It warned that the vessels will be stopped.

Israel’s U.N. Ambassador Gabriela Shalev accused organizers of the aid ships Junia and Julia of seeking “to incite a confrontation and raise tensions in our region.”

A deadly Israeli commando raid on a Turkish ship trying to bring aid to Gaza on May 31 killed nine activists and focused international attention on Israel’s blockade of Gaza, imposed after the Islamist militant and anti-Israel Hamas violently overran the Palestinian territory in June 2007.

In letters to Secretary-General Ban Ki-moon and the Security Council obtained Thursday by The Associated Press, Shalev said, “Israel reserves its right under international law to use all necessary means to prevent these ships from violating the … naval blockade.”

She called on Lebanon’s government “to demonstrate responsibility” and prevent the two ships, Junia and Julia, from departing.

Israel and Lebanon remain “in a state of hostility,” Shalev said, and “such action will prevent any escalation.”

Shalev said it can’t be ruled out that the Junia and Julia are carrying weapons “or individuals with provocative and confrontational intentions.”

The killing of the eight Turks and one Turkish-American on May 31 put Israel under growing pressure to open Gaza’s borders.

Under the old blockade rules, only basic food and medicine were allowed into Gaza. In a first step after the flotilla raid, Israel decided to let in most consumer goods but said Gazans would continue to be banned from travel and exporting goods for the time being.

Egypt also decided to ease its closure of Gaza after the flotilla raid, opening its borders to restricted travel and limited humanitarian convoys. The move restored a link to the outside world for at least some of Gaza’s 1.5 million Palestinians.

Shalev highlighted “that all goods that are not weapons or material for war-like purposes are now entering the Gaza Strip through appropriate mechanisms that ensure their delivery as well as their civilian nature.”

In the latest challenge to the blockade, a Libyan aid ship blocked by Israeli missile ships from steaming to Gaza arrived in the Egyptian port of el-Arish on July 14. Its cargo was to be unloaded and handed over to the Red Crescent to deliver to Gaza. AP