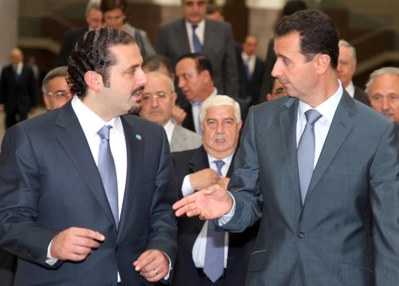 Lebanon Prime Minister Saad Hariri who is in Damascus on a two day official visit was asked on Sunday by a reporter about the Special Tribunal for Lebanon (STL) and his response was : “Let’s all deal with the matter calmly, ” MTV’s correspondent reported.

He made the statement following his meeting with Syrian President Bashar al-Assad .

Hariri said that his relationship with the Syrian President is built on honesty and understanding.

Hariri also met earlier in the day with his Syrian counterpart, to sign 17 bilateral agreements.

A reported in the German Der Spiegel magazine dated May 2009 revealed a link between Hezbollah and the assassination of Lebanon’s former PM Rafik Hariri, father of the current prime minister.

Initially Syria was accused of being behind Hariri’s murder , but ever since the Der Spiegel report surfaced, all fingers have been pointing at Hezbollah. Many analysts however believe that Hezbollah could not have done it without Syria’s help. The relationship between Hariri and Assad was at its lowest point when the Lebanese PM was assassinated.

According to media reports the tribunal’s indictment will be issued before the end of 2010. There are also reports that some Hezbollah members are named in the indictment.