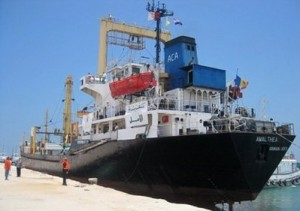 The Egyptian Red Crescent is transporting an estimated 2,000 tons of Libyan food and medical aid to the Gaza Strip by land on Thursday. The aid was being off- loaded from the Moldovan-flagged Amalthea at the port of El-Arish in Egypt late on Wednesday.

Initially the boat was planning on docking in Gaza, but the intervention of around Israel Navy vessels meant the ship had little choice other than to head for El-Arish, on the northern shoreline of the Sinai Peninsula.

While the episode ended with no loss of life, unlike the highly reported Gaza flotilla of May 31, Israel knows more aid ships will likely set sail for Gaza and there will be further confrontations with its navy.

At the same time, while Hamas, which controls Gaza, expressed its disappointment at the failure of the Amalthea to reach the strip, reports suggest in order to arrive at a peaceful conclusion to this maritime journey, Israel had to agree to allow a large cash sum to be transferred to the Gazan coffers.

NO REPEAT OF MAVI MARMARA

Initially Israel feared the Libyan-sponsored trip would end in a clash between those on board and Israeli commandoes. When armed Israelis descended from helicopters onto the deck of the Mavi Marmara, the Turkish ship that headed the May 31 convoy, nine people lost their lives in the violence that ensued.

The Israeli government was keen to ensure there would be no repeat performance this week. In order to do so, it is understood that Israeli Defense Minister Ehud Barak held talks with Egyptian Head of Intelligence Omar Suleiman.

Some reports suggest a line of communication was also established between Barak and the son of Libyan President Muammar Gaddafi, Saif Al-Islam. Gaddafi junior heads the organization that bankrolled the Amalthea voyage. Arabic and Hebrew newspapers suggest the deal was brokered by Jewish Austrian businessman Martin Schlaff, who is thought to have close ties to leaders in both Israel and Libya.

The price for Israel though is heavy. First it had to leave the security check of the cargo to the Egyptians at El-Arish, and secondly, and arguably far more significantly, not only will the Gazans receive all the aid on board, but a reported 50 million U.S. dollars will be sent from Libya to Gaza. That money will go directly to projects managed by the United Nations Relief and Works Agency (UNRWA).

Yet if anything this is a “success” story for Israel, according to Ely Karmon, a senior research scholar at the Institute for Counter-Terrorism, a department within Israel’s Interdisciplinary Center. He believes that while Israel cannot claim victory in the battle against the flotillas, it has notched up several accomplishments over the last few weeks.

The Amalthea episode is proof that people sit up and take note when Israel issues a warning or a deterrence, which is what the boarding of the Mavi Marmara proved to be, Karmon said on Thursday. In the interim, boats that were meant to set sail for Gaza from Lebanon and Iran have so far failed to materialize.

On the diplomatic front too, Israel appears to have scored some points, much to the chagrin of Ankara, which backed the convoy that was headed by the Mavi Marmara.

“The Turks aren’t happy that the Americans failed to support their position (calling for an international inquiry) and that, if anything, relations with Israel have improved with Prime Minister Benjamin Netanyahu’s visit to President Barack Obama,” Karmon said.

Furthermore, in the wake of the May 31 flotilla incident, Germany has outlawed the IHH, the Turkish Islamist organization that Israel claims was the instigator of the violence aboard the Mavi Marmara. Likewise there is a move in Washington by Congress to declare the IHH an illegal organization.

Regarding this week’s diversion of the Amalthea, Karmon believes Israel succeeded in gaining cooperation from Cairo, Moldova, Greece, from where she set sail, and even Libya, which has no diplomatic ties at all with the Jewish state.

In Hamas circles, the events of the last 48 hours are seen from a very different perspective. The movement told Xinhua it is waiting to see whether the Libyan aid and the cash actually make it into Gaza.

The trouble with the agreement that allowed the boat to land in El-Arish is that the Libyans cut it with Israel, according to Ahmed Yusuf, a senior adviser to Hamas’ prime minister in the Gaza Strip Ismail Haneya.

“We don’t trust the Israelis in anything. They’ve deceived everybody before, UNRWA and the international community,” he said.

Despite Israel’s successful vanquishing of the Amalthea, that is not the end of the international effort to break the Israeli blockade of the Gaza Strip.

While Israel maintains it has taken this line of action to prevent weapons and materials that have potential military use from getting to Gaza, activists in Asia and Europe insist Israel’s hold on the Gazan coastline is illegal. They say more ships will come, particularly in September and in the run-up to the Muslim holy month Ramadan.

Yusuf hopes this will eventually bring about the collapse of the Israeli naval blockade of Gaza. He is urging international activists, particularly in the Arab world, to show solidarity with the Gazans and to do their utmost to transport aid, building materials and cash into the Palestinian territory.

Only with the continuation of this push will the Hamas in Gaza be prepared to judge the success of the various “defeat the blockade” campaigns.

“We wait to see if we can talk about victory or deception here, ” said Yusuf.