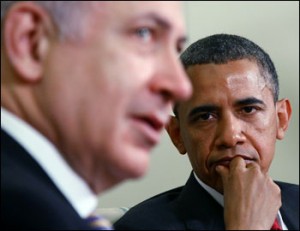 A blue-and-white Israeli flag hung from Blair House. Across Pennsylvania Avenue, the Stars and Stripes was in its usual place atop the White House. But to capture the real significance of Prime Minister Binyamin Netanyahu’s visit with President Obama, White House officials might have instead flown the white flag of surrender.

Four months ago, the Obama administration made a politically perilous decision to condemn Israel over a controversial new settlement. The Israel lobby reared up, Netanyahu denounced the administration’s actions, Republican leaders sided with Netanyahu, and Democrats ran for cover.

So on Tuesday, Obama, routed and humiliated by his Israeli counterpart, invited Netanyahu back to the White House for what might be called the Oil of Olay Summit: It was all about saving face.

The president, beaming in the Oval Office with a dour Netanyahu at his side, gushed about the “extraordinary friendship between our two countries.” He performed the Full Monty of pro-Israel pandering: “The bond between the United States and Israel is unbreakable” . . . “I commended Prime Minister Netanyahu” . . . “Our two countries are working cooperatively” . . . “unwavering in our commitment” . . . “our relationship has broadened” . . . “continuing to improve” . . . “We are committed to that special bond, and we are going to do what’s required to back that up.”

An Israeli reporter attempted to summon the effusive American back to reality: “Mr. President, in the past year, you distanced yourself from Israel and gave a cold shoulder to the prime minister. Do you think this policy was a mistake? . . . Do you trust Prime Minister Netanyahu?”

Obama assumed an amused grin. “Well, let me first of all say that the premise of your question was wrong, and I entirely disagree with it,” he said. He said he had always engaged in “a constant reaffirmation of the special relationship” with Israel, and “I’ve trusted Prime Minister Netanyahu since I met him before I was elected president.”

So that business about Hillary Clinton calling Israel’s settlement action “insulting” and the State Department accusing Israel of a “deeply negative signal” that “undermined trust and confidence in the peace process and in America’s interests”? You must have imagined it.

Obama came to office with an admirable hope of reviving Middle East peace efforts by appealing to the Arab world and positioning himself as more of an honest broker. But he has now learned the painful lesson that domestic politics won’t allow such a stand.

On Pennsylvania Avenue outside the White House on Tuesday, liberal activists protested what many of them see as a betrayal. “We want to appeal to Obama to stand up for once, to get a little vertebrate in his invertebrate back and speak to Netanyahu in no uncertain terms,” protester Ray McGovern shouted into a bullhorn. Obama, he added, is “a president who by all indications is what we call in the Bronx a ‘wuss’: a person who will not stand up for what he knows is right.”

Even before Obama’s surrender to Netanyahu, Muslims were losing faith that he would be the transformational figure who spoke to them from Cairo last year. A Pew Research Center poll last month found that the percentage of Muslims expressing confidence in Obama fell from 41 percent to 31 percent in Egypt and from 33 percent to 23 percent in Turkey.

Obama snubbed Netanyahu at their last meeting, shortly after Israel’s announcement during a visit by Vice President Biden that it would build new housing in a disputed area of Jerusalem. No statement or photograph of the meeting was made public. But Israel didn’t back down, and neither did it heed administration pleas to use “caution and restraint” before the deadly raid by Israeli commandos on an aid flotilla bound for Gaza.

Netanyahu arrived at the White House to see bulldozers and piles of rubble along the West Wing driveway from a construction project on the North Lawn. Inside, he found more construction underway: Obama feverishly rebuilding the U.S.-Israel relationship. The president’s opening statement in front of the cameras contained not a word of criticism of the Jewish state.

“Well, I just completed an excellent one-on-one discussion with Prime Minister Netanyahu,” he began. For those tuning in late, he added at the end: “So I just want to say, once again, that I thought the discussion that we had was excellent.”

Netanyahu was pleased with the pandering. “Mr. President, I want to thank you for reaffirming to me in private and now in public, as you did, the long-standing U.S. commitments to Israel.”

Obama didn’t even mention Israel’s settlements until a reporter inquired — and then he declined to say that Israel should extend a moratorium on settlements that expires in September. Avoiding any criticism of Israel, he instead directed Palestinians not to look for “excuses for incitement” or “opportunities to embarrass Israel.”