by yalibnan
624
Pssssst. I’ve got a stock tip. Ready? The Al-Quds Index. What’s that? It’s the P.S.E., or Palestine Securities Exchange
Share: 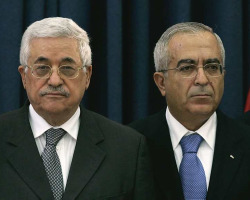 By: By THOMAS L. FRIEDMAN

Pssssst. I’ve got a stock tip. Ready? The Al-Quds Index.

What’s that? It’s the P.S.E., or Palestine Securities Exchange. Based in Nablus, in the West Bank, the Al-Quds Index has actually been having a solid year — and therein lies a tale.

“It has outperformed the stock exchanges of most Arab countries,” said Samir Hulileh, the C.E.O. of Palestine Development and Investment, which owns the exchange. The P.S.E. was established in 1996 with 19 companies and now has 41 — and 8 more will join this year. The companies listed there include the Commercial Bank of Palestine, Nablus Surgical Center, Palestine Electric Company and Arab Palestinian Shopping Centers. “Most are underpriced because of the political risk component,” said Hulileh. So if you don’t mind a little volatility, there is a lot of potential upside here. Indeed, there will soon be an E.T.F. — an exchange-traded fund — that tracks the Al-Quds Index so you can sit in America and go long or short peace in Palestine. 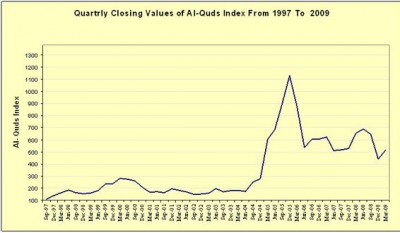 The expansion of the Al-Quds Index is part of a broader set of changes initiated in the West Bank in the last few years under the leadership of Prime Minister Salam Fayyad, the former World Bank economist who has unleashed a real Palestinian “revolution.” It is a revolution based on building Palestinian capacity and institutions not just resisting Israeli occupation, on the theory that if the Palestinians can build a real economy, a professional security force and an effective, transparent government bureaucracy it will eventually become impossible for Israel to deny the Palestinians a state in the West Bank and Arab neighborhoods of East Jerusalem.

“I have to admit, we, the private sector, have changed,” said Hulileh. “The mood used to be all the time to complain and say there is nothing we can do. And then the politicians were trying to create this atmosphere of resistance — resistance meant no development under occupation.”

Fayyad and his boss, President Mahmoud Abbas, changed that. Now the mood, said Hulileh, is that improving the Palestinian economy “is what will enable you to resist and be steadfast. Fayyad said to us: ‘You, the business community, are not responsible for ending occupation. You are responsible for employing people and getting ready for the state. And that means you have to be part of the global world, to export and import, so when the state will come you will not have a garbage yard. You will be ready.’ ”

Meeting in his Ramallah office two weeks ago, I found Fayyad upbeat. The economist-turned-politician seems more comfortable mixing with his constituents in the West Bank, where he has quietly built his popularity by delivering water wells, new schools — so there are no more double shifts — and a waste-water treatment facility. The most senior Israeli military people told me the new security force that Fayyad has built is the real deal — real enough that Israel has taken down most of the checkpoints inside the West Bank. So internal commerce and investment are starting to flow, and even some Gazans are moving there. “We may not be too far from a point of inflection,” Fayyad said to me.

The Abbas-Fayyad state-building effort is still fragile, and it rests on a small team of technocrats, Palestinian business elites and a new professional security force. The stronger this team grows, the more it challenges and will be challenged by some of the old-line Fatah Palestinian cadres in the West Bank, not to mention Hamas in Gaza. It is the only hope left, though, for a two-state solution, so it needs to be quietly supported.

The most important thing President Obama can do when he meets Israel’s prime minister, Bibi Netanyahu, on July 6 is to nudge him to begin gradually ceding control of major West Bank Palestinian cities to the Palestinian Authority so that Fayyad can show his people, as he puts it, that what he is building is an independent state “not an exercise in adapting to the permanence of occupation” — and so that Israel can test if the new Palestinian security forces really can keep the peace without Israel making nighttime raids. Nothing would strengthen Fayyadism more than that.

I am struck, though, at how much Fayyadism makes some Arabs and Israelis uncomfortable. For those Arabs who have fallen in love with the idea of Palestinians as permanent victims, forever engaged in a heroic “armed struggle” to recover Palestine and Arab dignity, Fayyad’s methodical state-building is inauthentic. Some Arabs — shamefully — dump on it, and only the United Arab Emirates has offered real financial help.

And for Israelis on the right, particularly West Bank settlers, who love the notion that there are no responsible Palestinians to talk to so the status quo will never change, Fayyadism is a real threat. Akiva Eldar, a columnist for the Israeli daily Haaretz, described this group perfectly the other day when he wrote how they “won’t relinquish the Arabs’ ‘no’s. Or, as the poet Constantine Cavafy wrote in ‘Waiting for the Barbarians’ … : ‘And now, what’s going to happen to us without barbarians? / They were, those people, a kind of solution.’ ” NYT