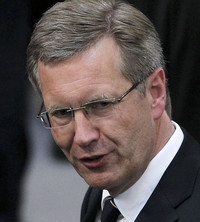 Chancellor Angela Merkel’s candidate for the German presidency, Christian Wulff, was elected in a third round of voting, as delegates used the first two secret ballots to take a swipe at her coalition.

The vote today by the 1,244-member assembly of federal lawmakers and state delegates, stretching over more than eight hours, marks “a serious shot across the bow for Merkel,” said Richard Stoess, a political scientist at the Free University in Berlin. While the result won’t bring down the government, it’s “a disaster for her image and her standing, given the overwhelming majority the coalition has in the assembly.”

Wulff, 51, the prime minister of Lower Saxony and a deputy leader of Merkel’s Christian Democratic Union party, got 625 votes to 494 votes for Joachim Gauck, 70, a pro-democracy activist and pastor from former East Germany nominated by the opposition Social Democrats and Greens. While Merkel commands a 21-seat majority in the assembly convened to elect the largely ceremonial president, Wulff failed to muster enough votes in two earlier rounds of voting.

Delegates who snubbed Merkel’s pick “very likely weren’t just those who simply preferred Gauck, but included dissenters determined to take a swipe in secret at her record in office,” Hans-Juergen Hoffmann, head of Berlin-based pollster Psephos, said by phone. “It shows there’s serious disgruntlement in the ranks of the coalition over her leadership.”

The election, called after the surprise resignation last month of the incumbent, Horst Koehler, was a test of Merkel’s authority after coalition bickering over policies from health care to tax cuts sapped public backing for the government as it grapples with Europe’s debt crisis.

The political setbacks for Merkel contrast with the rebound of Europe’s biggest economy from recession. German unemployment fell for a 12th month in June, the Federal Labor Agency said today, while exports are booming and the Ifo business-climate index rose to its highest in two years. The DAX Index is one of two euro-area equity benchmarks to avoid a decline this year.

“Merkel needs a breather after the euro shock and the departure of senior members of her party from office, including the president,” Peter Matuschek, head of political analysis at the Forsa polling company, said in an interview. “There are signs here and there that she’ll get it as the political caste in Berlin eases into the summer recess and the classic indicators on which the government leans — unemployment, exports, consumer confidence — start to brighten.”

Prior to Wulff, just two of the 13 German presidential elections since 1949 have gone to three rounds, the last time in 1994. The government-backed candidate won in all cases. While the first two rounds require the winner to garner a majority of the total votes cast, the rules change in the third round, with the candidate getting the most votes winning.

The benchmark DAX Index fell after the first-round vote failed to yield a winner before rebounding to gain 0.2 percent to 5965.52.

Wulff’s failure to win in the first two rounds was “a clear expression of growing dissatisfaction in the government,” Thorsten Polleit, the chief economist for Germany at Barclays Capital, said in a note.

A candidate backed by the Left Party, Lukrezia Jochimsen, didn’t contest the third round. A far-right candidate, Frank Rennicke, also retired after winning 3 votes at each of the first two rounds.

“To all those who made a different choice today, I want to pay my respect,” Wulff said in a speech after his election. “I will do my best to meet your expectations too.”

Wulff, who is married with one daughter and a son, will be sworn in on July 2. Bloomberg