Lebanese women aid ship to sail to Gaza via Cyprus 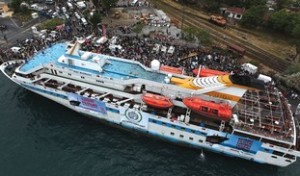 Women are “the new secret weapon” in use against the “thieving enemy,” said Samar Alhaj, (the woman leading the Lebanese boat Julian that was Christened as Mariam scheduled to try to break the naval blockade on Gaza) during an interview with Radio A-Shams

Asked by Zohair Bahloul why the ship, Mariam, would only be carrying women, she said, “We are women in order not to give the thieving enemy an excuse to use arms against the ship.” She said the ship would be carrying cancer medication for children, and women suffering from breast cancer and cancer of the uterus due to “chemical bombs” dropped on Gaza by Israel.

Lebanon has given permission for another flotilla to leave Tripoli for Gaza, according to a Beirut minister quoted by an-Nahar Monday morning.

Aridi said the voyage of the ship, the French-registered Julia, would not violate the terms of the cease-fire resolution. To clear the confusion over the latest Gaza flotilla initiative, Aridi added that while the ship was named Julia, the voyage itself was named Mariam.

While confirming that “Julia’s” first destination will be Cyprus and not Gaza, the minister stressed that he won’t sign on any illegal sail. He said “Julia” was registered in Paris and would have Lebanese and foreigners on board.

Aridi also stressed that “Julia’s” voyage to Cyprus was not in violation of Security Council resolution 1701 and that the vessel would undergo a technical checkup before it sails from Tripoli.

The Lebanese government is responsible of its decision, Aridi added.

There was a lot of confusion about the number of ships that will sail from Lebanon to Gaza, but Aridi was able to clarify that Mariam and Julian are the same ship