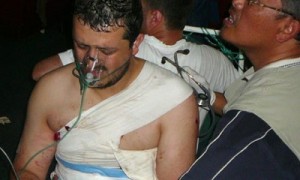 Vienna’s Jewish community said Wednesday that its members were increasingly being harassed after the bloody Gaza aid ship incident some two weeks ago.

The group said it was mainly a small minority of Muslims who were hassling Jews.

“Almost daily we see verbal abuse, spitting, incidents against people who are recognizable as Jews through their clothes,” the community’s president Ariel Muzicant was quoted as saying by broadcaster ORF.

There had been no physical violence, he said.

Muzicant’s organization also announced that it had filed cases against the organizers of recent large anti-Israeli and pro-Palestinian demonstrations, because anti-Semitic slogans appeared at those venues.

The protesters, mostly of Turkish and Arab origin, had gathered to condemn Israel’s stopping of an aid flotilla headed for the Gaza Strip, that included the killing on May 31 of nine activists by Israeli forces.

On one transparent documented by the Vienna Jewish community, demonstrators equated the Star of David with the swastika, putting Jews and Israelis on the same level as National Socialists.

A leading member of the Austrian Muslim community, Omar Al-Rawi, on Tuesday sharply condemned any attacks on Jews. “Should Muslim citizens have carried out such attacks, we clearly distance ourselves from them,” he said.

The Jewish community criticized Al-Rawi for having helped to organize one of the demonstrations.

Following the Gaza aid ship raid hundreds of demonstrators gathered in front of the Israeli embassy in Vienna to protest against Israel’s deadly raid , according to police.

Shouting slogans such as “Terrorist Israel” and “End the blockade of Gaza,” protesters called for the immediate release of the several hundred activists who were on board the ships and who are now in Israeli detention.

Nine people were killed and dozens injured last month when Israeli naval commandos boarded the Turkish ship Mavi Marmara. Most of the victims were reportedly Turkish.

“We are not against Jews. We are with the peace-loving Jews,” said Abdulla, an Austrian of Turkish origin. “This is not about religion, this is about humans,” he told the German Press Agency dpa.