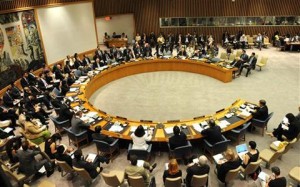 The U.N. Security Council has begun consultations on a possible fourth round of sanctions against Iran because of the country’s controversial nuclear program.

U.S. Defense Secretary Robert Gates said Tuesday he is optimistic the council will approve a new sanctions resolution soon. A French diplomat at the U.N. said a vote on the matter could come as early as Wednesday.

Iran warned any new sanctions could mean the end of talks on the issue. Iranian President Mahmoud Ahmadinejad said the U.S. and its allies are mistaken if they think they can impose sanctions and then sit down to talk.

Russian Prime Minister Vladimir Putin says the U.N. resolution is “practically agreed” upon. But he said the sanctions should not be excessive or create barriers on Iran’s path toward peaceful nuclear energy.

The U.S. and its allies accuse Iran of trying to make a nuclear weapon. Iran denies the charge.

Both Mr. Putin and Mr. Ahmadinejad commented from Turkey, Tuesday, where they are attending a regional summit.

Last month, Iran reached a deal with Turkey and Brazil to ship some of its uranium to Turkey in exchange for nuclear fuel.

President Ahmadinejad said Tuesday that the fuel swap deal is a one-time opportunity that will not be repeated. The Iranian leader said he hopes the international community will accept the arrangement. VOA