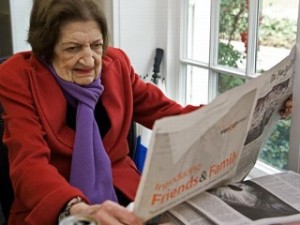 Helen Thomas a Lebanese American, columnist for the Hearst Newspapers, is under heavy fire by former U.S. officials and colleagues for her recent comments that Israelis should “get the hell out of Palestine.”

In a short interview on May 27 with Rabbi David Nesenoff at RabbiLive.com, Thomas suggested that Jews “go home” to Poland and Germany and America and “everywhere else.” Thomas, 89, has a front-row, center seat at the White House press briefings — due to her long-time career as a White House correspondent.

Former Clinton special counsel and spokesman Lanny J. Davis issued a statement Sunday calling on the White House to suspend Thomas’ privileges in the White House press room, and for Hearst to consider a similar suspension of her position as a nationally syndicated columnist.

“Of course Helen has the right as a private citizen under the First Amendment to speak her mind, even as an anti-Jewish bigot — but not as a member, much less privileged member with a reserved seat, in the WH press corps,” Davis wrote.

On Sunday, Thomas was dropped from her speaking agency, Nine Speakers, Inc.

The agency’s president Diane Nine issued a statement saying, “Ms. Thomas has had an esteemed career as a journalist, and she has been a trailblazer for women, helping others in her profession, and beyond. However, in light of recent events, Nine Speakers is no longer able to represent Ms. Thomas, nor can we condone her comments on the Middle East.”

Thomas issued a statement of apology after her comments became public, saying, “I deeply regret my comments I made last week regarding the Israelis and the Palestinians. They do not reflect my heart-felt belief that peace will come to the Middle East only when all parties recognize the need for mutual respect and tolerance. May that day come soon.”

Thomas was the first female officer of the National Press Club, the White House Correspondents Association, and first female member of the Gridiron Club. She has covered nine presidents, since John F. Kennedy, and is considered the “dean of Washington press corps.”

Last August, President Obama made a special visit to the briefing room with cupcakes to wish her a happy birthday.

But Abraham Foxman, national director of the Anti Defamation League, said Sunday that her apology “does not go far enough.”

“Her remarks were outrageous, offensive and inappropriate, especially since she uttered them on a day the White House had set aside to celebrate the extraordinary accomplishments of American Jews during Jewish America Heritage Month,” Foxman said.

“We believe Thomas needs to make a more forceful and sincere apology for the pain her remarks have caused,” he said.

Thomas has also come under criticism for her pointed questioning of U.S. support of Israel to White House Press Secretary Robert Gibbs , a day after a violent clash between Israeli commandos and international activists aboard a flotilla of six ships purportedly filled with humanitarian aid headed for the Gaza Strip.

Fellow columnists, such as Time Magazine’s Joe Klein, have also called for her removal from her front-row position at the White House press briefings.

“She should lose her job over this,” Fleischer said in an email to the Huffington Post. “As someone who is Jewish, and as someone who worked with her and used to like her, I find this appalling.

“She is advocating religious cleansing. How can Hearst stand by her? If a journalist, or a columnist, said the same thing about blacks or Hispanics, they would already have lost their jobs.”

Hearst Newspapers spokesman Paul Luthringer emailed the Washington Post: “We deeply regret Helen Thomas’ remarks, which in no way reflect the views of Hearst Newspapers or its employees. Helen has expressed her own profound regret over the incident.”

Just before Thomas announced her resignation, the White House Correspondents’ Association called a “special meeting” to consider “whether it is appropriate for an opinion columnist to have a front-row seat” in the briefing room.

The journalists who sit by her side covering the White House issued a rebuke, praising her career as a “trailblazer” but calling her comments “indefensible.”

It isn’t the first time Helen Thomas has been outspoken. Since 1960 she’s been facing down presidents.

There’s a photo of her smiling in China with President Nixon but at press conferences she would yell, “Mr. President, when are you going to stop bombing Cambodia?”

For President Bush she said, “Your decision to go to war has caused the deaths of thousands of Americans and Iraq is…”

He replied, “To assume I wanted war is just flat wrong, Helen, in all due respect.”

Then Thomas shared an opinion of the current president while promoting her latest book on realnews.com. She was asked, “What do you make of Obama’s whole Middle East policy? Is there a break here with Bush or not?”

Thomas said, “Too one-sided in favor of Israel. He ignores all the horrors that have happened to Palestinians. Their country taken away. Thousands imprisoned for many many years.”

When Thomas became even more open about her views as a columnist for Hearst there was talk of removing her from her front row seat but out of deference to her longevity she remained.

Monday night she remained inside her home in Woodley Park. But friends and relatives we spoke to say they are saddened by the way this illustrious career has come to an end.