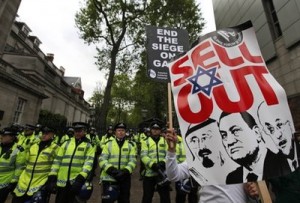 Egypt opened its border with the Gaza Strip on Tuesday, letting Palestinians cross until further notice amid a storm of international criticism of Israel’s blockade of the enclave, officials in Egypt and Gaza said.

The move, urged by the Palestinian Islamist movement Hamas against whom the embargo has been directed, prompted dozens of people to race to the crossing point in the southern Gaza Strip town of Rafah, though the gates appeared still to be closed.

It is the only point on Gaza’s borders that is not fully controlled by Israel. Cairo, coordinating with Israel, has opened it only sparingly since Hamas Islamists, who are allied to Egypt’s opposition, seized control of Gaza three years ago.

A permanent opening of the crossing, which lies above a stretch of desert frontier riddled by hundreds of smuggling tunnels, would be a major boost for Hamas and a blow to efforts by Israel and its Western allies to cripple the Islamists.

The Interior Ministry run by Hamas since it seized control of the Gaza Strip from Palestinian President Mahmoud Abbas in June 2007 said in a statement: “Rafah crossing is open every day from 9 a.m. (0600 GMT) to 7 p.m.” Since Hamas took over, Egypt has opened the crossing only sporadically and with restrictions.

An Egyptian security source told Reuters: “Egypt opened its border with the Gaza Strip on Tuesday to allow humanitarian and medical aid to enter the Strip.

“The border will remain open for an unlimited time,” the source said, letting Palestinians enter and leave Egypt.

Aid convoys, to which Egypt has in the past allowed only limited access, would be allowed to use the crossing, subject to following Cairo’s limitation that only food and medical supplies be transported.

“Hard materials” — apparently including concrete and steel which Gazans want to repair damage from last year’s Israeli offensive — would have to go via Israel, the Egyptian source said. Israel has made clear since it halted a Turkish-backed aid convoy at sea on Monday that it will not ease its embargo.

The deaths of nine activists when commandos stormed a Turkish ship in international waters have unleashed a storm of criticism of Israel. United Nations officials have demanded an end to the blockade, which has impoverished the 1.5 million people of the Gaza Strip. Israel’s main ally the United States has been more cautious in its response to the incident.

Hamas official Ghazi Hammad, who is in charge of borders for the Islamist government in Gaza, said: “The Rafah situation is now back to what it was before June 2006.”

He was referring to the month when Hamas and allied groups captured Israeli soldier Gilad Shalit, who remains a captive in Gaza and whose fate has been at the center of failed negotiations to ease the embargo imposed by Israel with Egyptian and international cooperation since then.

After Israel withdrew troop and settlers from Gaza in 2005, the European Union placed monitors at the Rafah crossing to reassure Israel that weapons would not reach Gaza from Egypt. That system of surveillance collapsed, and the blockade was tightened, when Hamas seized full control of Gaza in 2007.

Earlier on Tuesday, Hamas’s Syrian-based leader Khaled Meshaal said: “We call on our brothers in Egypt to use this historic moment to open Rafah crossing. Egypt is able to do this and that would indeed be a real response to Israel’s actions.”

Cairo has tried unsuccessfully to broker a reconciliation between Hamas and Abbas’s Fatah faction, as well as to mediate between Hamas and Israel. Hamas’s links to Egypt’s opposition Muslim Brotherhood has ensured its ties with Cairo are uneasy.