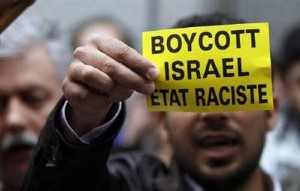 The U.N. Security Council early Tuesday condemned “those acts which resulted in” the deaths of at least nine civilians aboard an aid flotilla bound for the Gaza Strip, and called for a “prompt, impartial, credible and transparent” investigation into why and how the Israeli military acted to stop the ships from reaching their destination.

“The Security Council deeply regrets the loss of life and injuries resulting from the use of force during the Israeli military operation in international waters against the convoy sailing to Gaza,” the statement said. It added, “The Security Council requests the immediate release of the ships as well as the civilians held by Israel. The Council urges Israel to permit full consular access, to allow the countries concerned to retrieve their deceased and wounded immediately, and to ensure the delivery of humanitarian assistance from the convoy to its destination.”

The statement, which appeared to be less directly critical of Israel than Turkey and many Arab countries had demanded, said Israel’s blockade of Gaza is “not sustainable” and called for a regular flow of supplies into the impoverished Palestinian territory.

“The Security Council underscores that the only viable solution to Israeli-Palestinian conflict is an agreement negotiated between the parties and re-emphasizes that only a two-State solution, with an independent and viable Palestinian State living side by side in peace and security with Israel and its other neighbors, could bring peace to the region,” the statement said.

At least nine pro-Palestinian activists were killed and dozens were injured early Monday when Israeli naval commandos took control of the boats about 70 miles offshore in international waters. Turkey had dispatched the main Mavi Marmara ship, which carried 600 activists and thousands of tons of aid.

When the 15-nation security council met in emergency session hours after the melee, Turkey’s foreign minister, Ahmet Davutoglu, urged the group to condemn “this Israeli act of aggression” and punish those responsible.

Behind closed doors, U.S. diplomats sought to prevent the council from authorizing a U.N. investigation into the Israeli raid, saying Israel should be given a chance to conduct a credible investigation first.

The United States found itself in the difficult position of trying to mediate between two important allies at the emotionally charged session, which provided a barometer of international anger over the Israeli attack.

Alejandro Wolff, the United States’ second-highest-ranking ambassador to the United Nations, said Monday that the United States is still trying to “ascertain the facts” but that it “regrets the tragic loss of life and injuries.” Wolff said the United States expects “a credible and transparent investigation and strongly urges the Israeli government to investigate the incident fully.”

But Wolff also scolded the members of the humanitarian convoy, saying that their unapproved delivery of aid “by sea is neither appropriate nor responsible, and certainly not effective, under the circumstances.” Wolff said that “non-provocative and non-confrontational” procedures exist for delivering assistance to Gazans.

The Turkish foreign minister, however, compared Israel’s action as “tantamount to banditry piracy” and accused Israeli leaders of lying about the alleged presence of radical Islamists on the aid ships. “It saddens me to see that officials of a state stoop so low as to lie and struggle to create pretexts that would legitimize their illegal actions,” Davutoglu said, using unusually harsh language for such a forum.

John Holmes, the U.N. humanitarian relief coordinator, also strongly criticized the Israeli action, saying: “I condemn this dreadful waste of life over a humanitarian issue. Whatever the truth about what happened, which the full investigation called for by the secretary general should establish quickly, such an incident should never have happened or needed to happen.”

Israel’s deputy U.N. ambassador, Daniel Carmon, countered that the flotilla’s intention was to break what he described as a legal maritime blockade on Gaza and that some of the activists had “known terrorist history.”

“What kind of peace activists use knives, clubs and other weapons to attack soldiers who board a ship in accordance with international law?” Carmon told the council. “The answer is clear: They are not peace activists; they are not messengers of good will. They cynically use a humanitarian platform to send a message of hate and to implement violence.

An earlier draft statement introduced by Turkey condemned Israel in the “strongest terms” for the attack on the aid flotilla and called on Israel to pay compensation to those affected by the attack.

The statement characterized Israel’s action — which occurred in international waters — as a “clear violation of international law,” and asked U.N. Secretary General Ban Ki-moon to “undertake an independent international investigation by the U.N. to determine how this bloodshed took place and to ensure that those responsible would be held accountable.”