Protests across the world condemn Israel 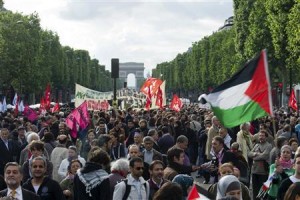 Thousands of demonstrators took to the streets in Europe and the Middle East on Monday, clashing with police as they protested against the Israeli storming of a Gaza-bound aid flotilla during which 10 activists were killed.

In Athens, some 3,500 protesters rallied outside the Israeli embassy, chanting “Hands off Gaza” and “Free Palestine.” Several hundreds clashed with police, throwing chunks of marble, stones and bottles. Police fired teargas to disperse them.

“Demonstrators set barricades on fire, police chased them, there were a lot of stones and teargas and a few people had blood on their heads,” a Reuters witness said, adding he saw four people injured. Police said they detained five protesters.

The Israeli marines’ action in the eastern Mediterranean sparked street protests and government ire in Turkey, long Israel’s lone Muslim ally in the region, and thousands of followers of an anti-U.S. cleric took to the streets in Baghdad.

Small, peaceful anti-Israel demonstrations were held in Rome and other Italian cities. “The Italian government needs to immediately call back its ambassador from Israel as other countries in Europe have done,” said Paolo Cento, a leftwing politician among the demonstrators.

“This is extremely serious and has no precedent whatsoever in the history of international diplomacy.”