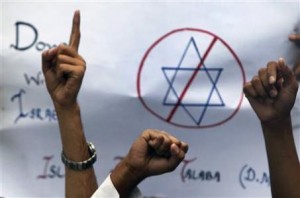 The high number of deaths in the Israeli interception of the Gaza flotilla has led to an inevitable diplomatic fallout for Israel.

Governments everywhere are asking how and why this happened – some angrily, some cautiously. Many are protesting.

Israeli Prime Minister Benjamin Netanyahu is flying home after cancelling a meeting with US President Barack Obama (who has limited himself to regrets and a commitment to “understanding” the circumstance). The meeting was to have been used to try to patch up tense relations.

Perhaps the most significant damage will have been done to Israel’s relations with Turkey. It was not so long ago that the two countries shared a certain strategic vision of opposing Islamist extremism in the region.

Since the Gaza invasion in 2007, Turkey has turned hostile to Israel. This episode, involving a ship with so many Turks on board, will only exacerbate that hostility. Turkey has recalled its ambassador. Prime Minister Recep Tayyip Erdogan called the Israeli action “state terrorism”.

Israel’s standing with the European Union has also taken another knock. The EU foreign policy representative, Catherine Ashton, called for an inquiry and for the blockade of Gaza to be lifted.

British Foreign Secretary William Hague, sympathetic to Israel, said: “I deplore the loss of life”, a phrase that avoids laying blame, but added that Israel needed to act “with restraint” over Gaza, and that it should follow the Security Council resolution (1860) and lift restrictions on Gaza.

The incident, therefore, is more than just a clash at sea. It calls into question Israel’s wider approach to Gaza, and indeed the faltering peace process itself – now centred on the proximity talks brokered by the Americans.

Israel is again on the defensive, deploying all its available means of information to state that the pro-Palestinian activists (pro-Hamas, according to Israel) attacked the commandos and are to blame for the deaths. The ships, Israel says, could have landed at Ashdod with the goods sent on to Gaza.

The activists claim that this was at least disproportionate, and at worst murderous.

Beyond the public recriminations, military professionals everywhere will want to understand how Israeli commandos were unable to gain control without what appears to have been an extensive use of live fire.

Video released by the Israeli military shows individual commandos rappelling on to the ship from helicopters and, in one case at least, being outnumbered and attacked by several people on board the ship.

The video appears to show one of the activists charging commandos (it is difficult to distinguish between solders and civilians) with a long metal pole. Video on the Israeli Foreign Ministry website shows hand-held catapults, metal rods, bags of marbles and a hammer found on the ship.

An account of the clash by an Israeli reporter on ynetnews said that the “navy commandos fell right into the hands of the Gaza mission members”.

He wrote that the troops had “paintball” rifles which made no impression. They then used stun grenades. They were not expecting such opposition, he said.

One soldier had his handgun seized and was knocked unconscious, according to the report. After that the order to use live fire was given. The report quoted one commando as saying that someone with a rifle fired at them.

The Israeli army reported that two activists had pistols seized from military personnel. It is said that the pistol magazines were empty, suggesting that the pistols had been fired at the troops.

In due course, evidence will emerge from the activists on board.

But how did two soldiers lose their weapons? This will be of concern to the senior Israeli command. It raises serious military questions about the operation.

How was it planned? Were the commandos placed in a situation too difficult to extract themselves without considerable loss of life to the activists? If so, why did that happen?

The ynetnews reporter said that two errors were made – one was not to expect such serious opposition, the other was not to hurl stun grenades and smoke bombs from the helicopters and so confuse those on deck.

Some Israeli officers might be thinking back to an easier operation in 1968 when the PLO chartered a former Greek ferry to try to run into Haifa (copying the voyage of the Exodus). The Israelis blew it up in Limassol harbour in Cyprus.

But this expedition had a number of ships and so the pre-emptive option was not there.

Instead the Israelis decided to intercept the flotilla out at sea, beyond the co-ordinates of the maritime blockade which Israel is enforcing on Gaza, claiming a right under international law. It says it acted beyond the blockade limits because of the number of vessels involved, meaning presumably that there would be less chance of one or two slipping through.