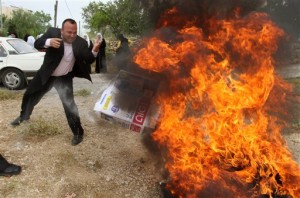 The Palestinians stepped up a campaign against Israeli settlement products Tuesday, with hundreds of volunteers in white T-shirts distributing a brochure with brand names and photos of 500 goods they want West Bank consumers to shun.

The campaign drew an angry response from the settlement movement which demanded that Israel close its ports to Palestinian goods. Government officials have said the boycott is counterproductive at a time of renewed peace efforts, but have not threatened retaliation.

Also Tuesday, Israel’s government said it had made a “big mistake” by barring Noam Chomsky, a prominent American linguist and outspoken Jewish critic of Israel, from entering the West Bank earlier this week. Israel’s Interior Ministry said a border clerk had wrongfully denied entry to Chomsky, and that he was free to enter.

Israel has built dozens of settlements for half a million Israelis in the West Bank and east Jerusalem, lands that were captured in the 1967 Mideast war and that are claimed by the Palestinians for their state.

The government of Palestinian President Mahmoud Abbas argues that it must do everything it can to deprive Israeli settlements of a lifeline.

Violators face prison and up to $14,000 in fines, though officials have said the ban on labor would not be enforced until the end of the year because of high unemployment in the West Bank. An estimated 20,000 Palestinians work as construction workers or in industrial parks in the settlements.

Some 3,000 volunteers, most of them university students, fanned out across the West Bank, signing residents to a pledge not to buy settlement products and affixing stickers to front doors reading “My conscience is clear. I have no settlement products in my house.”

In Ramallah, homeowner Raed Saleh took the brochure, signed the pledge and agreed to have the sticker put on his door.

The brochure contains photos and descriptions of goods manufactured in the West Bank, east Jerusalem and the Israeli-annexed Golan Heights, all captured in the 1967 Mideast War. The list of goods includes brands of canned food, spices, milk, juice, potato chips, olive oil, furniture, electronics and cosmetics.

In the Palestinian town of Salfit, near one of largest settlement industrial parks, residents threw confiscated settlement goods into a large bonfire.

Palestinian officials estimate that at least $200 million worth of settlement goods are sold in the West Bank each year.

Under interim peace deals of the 1990s, Israel and the Palestinians agreed on a free flow of goods and workers in both directions.

However, Palestinian government spokesman Ghassan Khatib said the agreement did not cover settlements.

The Yesha Council, the umbrella organization for Israeli settlements, denounced the boycott as an “act of terrorism and ill will” by the Palestinian Authority. It urged the Israeli government not to negotiate with Palestinian leaders as long as the boycott is in effect, to close Israeli ports to Palestinian goods and freeze the transfer of taxes it collects on behalf of the Palestinians.

In neighboring Jordan, meanwhile, Chomsky delivered a lecture to Palestinian university students by video link after being denied entry to the West Bank by Israeli border officials earlier in the week.

The lecture covered U.S. foreign policy and was attended by dozens of students and professors at Bir Zeit University near Ramallah, university officials said. Chomsky was denied entry as he tried to cross into the West Bank from Jordan.

Interior Ministry spokeswoman Sabine Haddad said Tuesday that Chomsky was denied access due to an error by a low-level border clerk.

“He should have been allowed in, it was a big mistake,” Haddad said. “The clerk for some reason thought there was an issue of letting him in so denied him access,” she said. “If he wants to come to the border he will be allowed in.”