Kuwaiti Emir in Lebanon for a two-day official visit 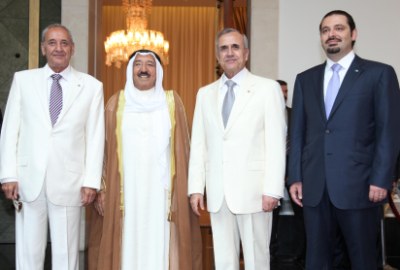 Hariri headed to Damascus after welcoming the Kuwaiti Emir.

The Kuwaiti Emir later had a meeting with Berri at the Habtoor Grand Hotel in Sin al-Fil to discuss current events in the Middle East and bilateral relations.

The Emir will be heading to the Baabda Presidential Palace for a closed meeting with president Suleiman. The agency added that the president will host a dinner Tuesday night in honor of the visiting Emir.

The visit to Lebanon will be the final leg of an Arab tour that started in Egypt with stops in Damascus and Amman.

His visit to Lebanon is aimed at reinforcing the strong relations between the two Arab countries. Kuwait was always a supporter of peace and stability in Lebanon. It headed the committee that was established according to an Arab League resolution in 1988 to unite all Lebanese groups. The Kuwaiti and Arab efforts were able to reach in 1989 Taef Agreement which had a positive effect on Lebanon’s security, stability, and development.

Lebanon’s Prime Minister Saad Al-Hariri, during an official visit to Kuwait in March, hailed the efforts of His Highness the Amir in stressing Arab solidarity and joint action, saying Arab conciliation began during the 2009 Arab summit in Kuwait. Kuwait is a friend of all Arabs, he emphasized