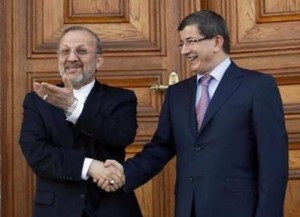 Mottaki said Friday nuclear talks between Iran and the senior EU official could take place in Turkey, which has offered to host such a meeting. He was speaking in Istanbul after talks with his Turkish counterpart, Ahmet Davutoglu.

Leading EU members Britain, France and Germany and the United States are pressing for new U.N. sanctions against Iran to punish it for continuing nuclear work that could be diverted to military use.

Washington and its allies accuse Iran of secretly trying to build nuclear weapons. Iran says its nuclear program is peaceful.

Turkey and Brazil oppose new sanctions against Iran and recently have stepped up their efforts try to resolve the dispute between Iran and Western powers diplomatically.

Both Turkey and Brazil are non-permanent members of the U.N. Security Council.

Syrian President Bashar Assad expressed support Saturday for Turkey’s efforts to find a diplomatic solution to the Iranian nuclear dispute. Mr. Assad was in Ankara for talks with his Turkish counterpart, Abdullah Gul.