Lebanon calls for UN action over Israeli monument near Shebaa 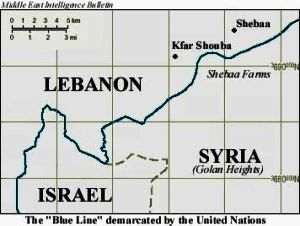 Lebanon called on the UN Security Council on Wednesday to take appropriate measures to compel Israel to remove a monument erected by the Israelis in the Shebaa Farms last April.

The request was made in a letter by Lebanon’s diplomatic officer to the UN, Caroline Ziyade.

“The Israeli act constitutes a flagrant violation of international law and reflects the nature of Israel,” she told UN Secretary General Ban Ki-moon.

According to Ziyade, the monument is an insult to Lebanese and increases tension along the border. She also asked the UN and the international community to pressure Israel to fully implement Security Council Resolution 1701.

Ziyade did not specify the nature of the monument and what it represents.

Lebanon considered the Israeli step “a clear violation of of UN Security Council resolution 1701: which ended the 33-day Israel- Hezbollah war in Lebanon in August 2006.

Shebaa Farms is located at the junction of southeast Lebanon, southwest Syria and northern Israel.

Both Syria and Lebanon agree that the Shebaa Farms are within Lebanese territory, however, Israel maintains that the area is within Syria’s borders and its fate should be discussed in future peace talks with Damascus.