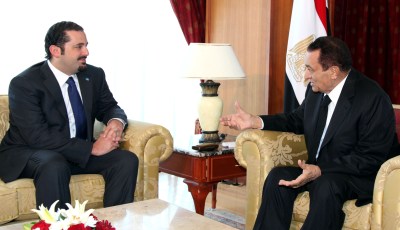 Prime Minister Saad Hariri has ended up his short visit to Egypt Tuesday with assurances by Egyptian president Hosni Mubarak that there will be no Israeli war on Lebanon.

Hariri was informed that Egypt is maintaining its contacts with the world regarding the Israeli threats and that it will always stand by Lebanon and Syria.

“The 2006 war and all the spies being unveiled are all things that indicate the amount of Israeli enmity toward Lebanon,” Hariri said after meeting Egyptian President Hosni Mubarak

“All remarks by the enemy must be seriously considered and therefore the necessary contacts must be made,” Hariri added.

Hariri told reporters before heading home from Sharm el-Sheikh that he discussed global and regional developments with Mubarak in addition to Israeli threats against both Lebanon and Syria. He criticized “the Israeli stubbornness and its stand against the peace process.”

Hariri said he also briefed Mubarak on the international efforts being exerting to avert an Israeli attack on Lebanon.

Hariri, who arrived in Sharm el-Sheikh before midday Tuesday, used the opportunity to congratulate Mubarak on the success of the surgery he recently underwent in Germany.

He was accompanied by former MP Bassem Sabeh, his office manager Nader Hariri and advisers Mohammed Shatah and Hani Hammoud.

Al-Hayat newspaper said Hariri and Mubarak will focus on the Lebanon situation in light of Israeli threats following accusations that Hezbollah was supplied by Syria with Scud missiles.

Despite Mubarak’s assurances to Hariri , Egypt warned on Tuesday against probable Israeli military escalation in Lebanon, the Egyptian Foreign Ministry said in a statement.

In a message to U.S. Secretary of State Hillary Clinton, Egypt’ s Foreign Minister Ahmed Abul Gheit expressed fear over possible Israeli military escalation that could lead to armed conflict like the one which erupted in 2006, a spokesman of the Egyptian Foreign Ministry said in a statement obtained by Xinhua.

Abul Gheit stressed in his message the importance of U.S. role in defusing tension in the area and protecting Lebanon against being dragged into military confrontation, spokesman Hossam Zaki said in the statement.

The Egyptian foreign minister “has conveyed in his message the anxiety which many Lebanese feel over … the mounting bellicose tone in the media and other forms of tension which warns of a looming threat,” the statement said.

Meanwhile, the Egyptian foreign minister stressed that Cairo will stand in solidarity with Lebanon, noting his country’s willingness and endeavor to spare Lebanon any danger that could shake its “stability and development march,” the statement said. Xinhua