by yalibnan
821
During this interview with Bloomberg , Lebanon's central Bank Governor Riad Salameh said:“Lebanon cannot sustain another conflict. Its economy will suffer. "
Share: 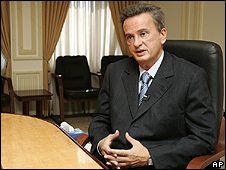 Lebanon’s Central Bank Governor Riad Salameh comments on the proposed budget for 2010, the outlook for interest rates, talk of bank mergers and the threat of war in the Middle East and its effect on the economy.

Salameh spoke in an interview with Bloomberg News on April 19 in the capital, Beirut.

On the proposed budget for 2010 with a $4 billion deficit:

“Our assessment of the deficit is going to be based on the capacity of growth in the country. If we have this deficit with a growth that can go over 6 percent this deficit would be sustainable and not reverse the downward trend of the debt to GDP ratio. The nominal figure is not what we are looking at, but the ratio of the deficit to GDP. If that declines and the ratio of the debt declines it means we are going in the right direction. We are calling for a reduction of the yearly deficit in the budget whether nominal or as a ratio between debt and GDP but we are not concerned about the negative impact on the stability of prices or confidence as long as we are putting in place the proper environment for growth.”

On the likelihood of interest rates falling further in Lebanon:

“I believe that markets are getting near a point of equilibrium in terms of interest rates in the country. I can see some stabilization happening and if there are declines they’re going to be mild. The financing requirements as announced in the budget are weighed on the fact that interest rates will stabilize. The reason behind a 3 percent decline in interest rates in one year was essentially the excess liquidity that came to the country which created competition in the different auctions. We are in a period of stabilization with possibilities of mild declines. I don’t see a drastic drop in interest rates if there is no massive inflow of liquidity in 2010. The pattern of increase in deposits in the first three months shows there is a sustained inflow of deposits to the country but it is not increasing over the average we had last year. We had about $3 billion to $3.5 billion in the first three months.”

On objecting to consolidation of Lebanon’s top 11 banks:

“We will not accept mergers between the top 11 banks of the country. We want to have a distribution of risk in the banking industry and don’t want concentration. We don’t want to fall into the problems encountered elsewhere of being too big to fail. There was an expression of interest which warranted a reminder.”

On the threat of war in the Middle East and its effects:

“Lebanon cannot sustain another conflict. Its economy will suffer. We are conducting our monetary policy very conservatively so that if there is a conflict it doesn’t impact negatively on the banks or the currency. We hope there will be no conflict.”

On measures the bank is taking:

“Building up the foreign currency reserves is one major aspect of it. Tightening or disciplining the liquidity in Lebanese pounds through our issuance of CDs is another aspect of it. We always have in mind the risks so that our system can sustain a sudden shock of that kind. Lebanon’s economic growth is consumption driven and any conflict would affect it substantially.”