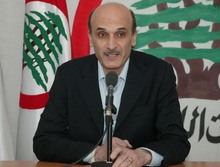 “The decision of when and how to defend Lebanon is currently not in the hands of the government,” Geagea told AFP

“An armed force independent of the army exists in Lebanon, and we do not know what that force intends to do,” he added in reference the Iranian and Syrian backed Hezbollah group.

Geagea stressed that “the Lebanese Army could easily carry out what Hezbollah is doing in the face of Israel … if it was granted a clear political decision in that regard.”

He said Hezbollah’s arms and its close ties to Damascus and Tehran “put Lebanon in danger.”

The United Nations has for many years been calling on Hezbollah to disarm in accordance with UN resolution 1559. Adopted in 2004, the resolution calls for “the disbanding and disarmament” of all factions in Lebanon.

The most recent report on 1559 stated: “The armed component of Hezbollah remains the most significant Lebanese militia in the country,”. The UN called on the group to “complete the transformation … into a solely Lebanese political party.”

Hezbollah responded by accusing the UN of being biased towards Israel and urged the UN to scrap 1559.